It is known that Rishi Kapoor and Neetu Kapoor have been in New York for a couple of months now. The reason being Rishi is receiving treatment for his health. While the disease is unknown, Neetu Kapoor had hinted at cancer. Though none of the family members have confirmed it, they did ask media to keep calm and not write speculated stories. 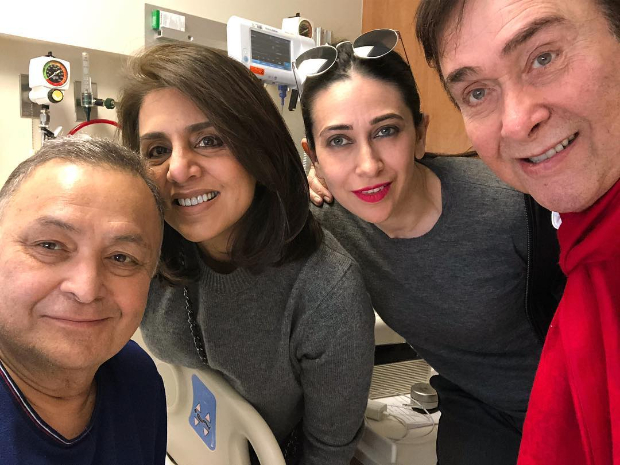 Just earlier this week, Rishi Kapoor and Neetu Kapoor got a surprise visit from their family members - eldest brother Randhir Kapoor and niece Karisma Kapoor. Neetu and Rishi seemed like they were in the hospital during their visit but they were delighted to see them. Neetu shared a lovely photo and captioned it, “The bestest brothers ever ???? their conversation is only food though ???? #family #bond #forever.”

On the work front, Rishi Kapoor was last seen in Anubhav Sinha's Mulk with Taapsee Pannu.

ALSO READ: Neetu Kapoor and Rishi Kapoor all set for their return to India

25 Years Of Coolie No 1: Karisma Kapoor…

“My sister, my second mother and my best…