Just a day ago, we received glimpses of the lavish lunch at the Kapoor household. Movie buffs would be aware that the Kapoor household is generally bustling with energy during festival season as the entire ‘Khandaan’ comes together to celebrate during all occasions. The annual Diwali lunch affair at their residence was a full-house event with not just the Kapoor family but also Saif Ali Khan’s family being a part of it. Meanwhile, post the lunch, Kareena Kapoor Khan decided to also have some low-key family time and celebration at her Mumbai residence with Saif Ali Khan, Taimur Ali Khan, and Jehangir Ali Khan. 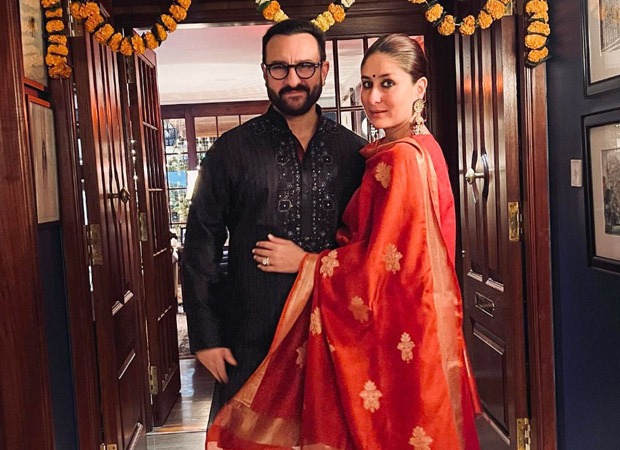 Kareena Kapoor Khan, who seems to be in love with social media, posted photos from the Diwali celebration at her residence. Dressed in Indian traditional style, the actress opted for a bun hairdo along with a red kurta set and ethnic jhumkas. On the other hand, Saif Ali Khan and their sons Taimur Ali Khan and Jehangir Ali Khan were dressed in matching looks which included a black kurta and white pajamas. The photos posted by the Laal Singh Chaddha actress were all about the Diwali shenanigans of the family and one of them included a photo of the family posing for the shutterbugs with Jehangir lying on the ground and throwing a tantrum. The actress also captioned the photos with a special Diwali wish adding, “This is Us ?? From mine to yours… Happy Diwali friends ?? Stay Blessed”

Many people commented on the ‘Jeh crying’ photo which included some of industry people and even several fans. Digital content creator Kusha Kapila dropped a comment on the series of photos saying, “It’s the last picture for me”. On the other hand, Kareena Kapoor Khan’s cousin and Shashi Kapoor’s grandson Zahan Kapoor too took to the platform to comment saying, “The last image is just tooooo good” Fans too had some quirky comments where one said, “Taimur in last picture perfectly represents my life rn” and yet another one added, “That last picture highlights, me laying on the floor, crying and my problems laughing at me.” Yet another social media user commented, “Watch out 4th one….real pataka of diwali ??” “Last picture is every couple’s reality after kids,” shared another.

On the work front, Kareena Kapoor Khan will next be seen in the Sujoy Ghosh directorial which is an adaptation of the novel Devotion of Suspect X. It will also mark her OTT film debut. Whereas, husband Saif Ali Khan is gearing up for the release of the magnum opus Adipurush featuring him as Lankeshwar along with Prabhas in the titular role and Kriti Sanon as Seeta.