One of the biggest victories in the history of Indian sports will now be presented on the big screen, albeit played by professional Bollywood superstars. But before that the team responsible for creating this iconic moment came together on the small screen. Kapil Dev and his team like Mohinder Amarnath, Sandeep Patil amongst others who were a part of the 1983 World Cup match visited the sets of The Kapil Sharma Show. 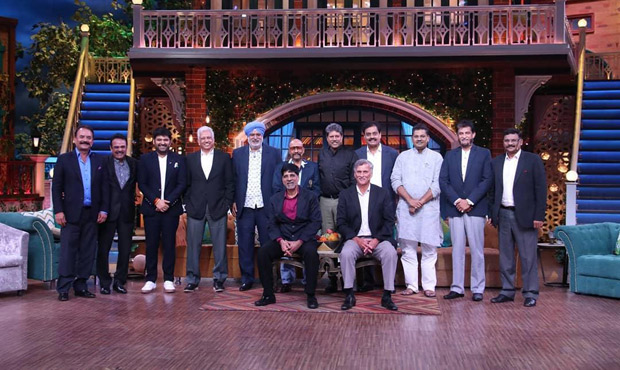 Needless to say, it was all fun and some of the moments have been going viral on social media. Fans of Kapil Sharma are obviously thrilled to see their favourite idol back and how! The host has once regained his fans with his sense of humour on television and his star studded show once again garnered high TRPs. The recent guests on the show are sure to grab some more attention with the winning team making a television appearance together after their win over three decades ago. Pictures of the guests are being shared on fan clubs of the comedian and it seems that the comedian had a gala time with the veteran players.

Interestingly, players like Ravi Shastri, Srikkanth, and Sunil Gavaskar were some of them who were missing from the show.

Coming to the Kabir Khan directorial titled ’83; this film on the 1983 World Cup will have Ranveer Singh playing the role of the captain of the Indian cricket team, Kapil Dev. Besides him, Tahir Raj Bhasin, Sunny Kaushal, Ammy Virk, Chirag Patil, Hardy Sandhu, Saqib Saleem amongst others are expected to be a part of the film where they will essay the characters of the other cricket players. The film will be shot extensively abroad in London and Europe. The real life cricketers are helping the actors in learning the nuances of the sport right!