They were once touted to be rivals but with time Madhuri Dixit and Sridevi created their own niche. Yet we never got the opportunity to bring them together on screen and now, it will never be possible. Expressing her sadness over the demise of her co-actor Sridevi, Madhuri recently reminisced about the actress whilst promoting her forthcoming film Total Dhamaal. Readers may be aware that she replaced Sridevi in Kalank, after the latter’s sudden demise in Dubai last year. 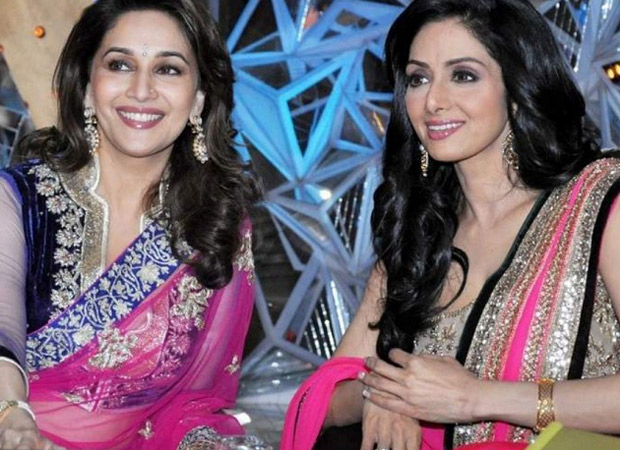 Madhuri Dixit, in a media report, recently recalled the time when she heard the news of Sridevi’s demise saying that it was very difficult to digest what had happened. Sridevi’s demise was not only a shock to her family but to the entire nation and the fraternity too. Amidst projects that were left mid-way due to the same, one was Kalank, a multi-starrer featuring Sanjay Dutt, Varun Dhawan, and Alia Bhatt amongst others. That’s when Karan Johar approached Madhuri Dixit who decided to come on board.

The actress further elaborated on how she reacted to the news mentioning that while signing the film, she could understand things on a professional level like the project had to go on and that the producer was stuck because of the sudden tragedy but it was dealing with the truth on a personal level that was more difficult. As for the script and her characterization, she didn’t have any qualms regarding the same.

While they haven’t come together on the big screen, we saw them coming together on the small screen. Madhuri Dixit and Sridevi had shared the stage in a dance reality show, a little before the actress’ demise, when Madhuri was the judge and Sridevi appeared on the show as one of the guests.

Speaking of Kalank, the film is a period drama set against the backdrop of the Independence era. Directed by Abhishek Varman, it also features Sonakshi Sinha and Aditya Roy Kapur in lead roles. Interestingly, it will also bring together Madhuri Dixit and Sanjay Dutt after two and a half decades.