Alia Bhatt and Madhuri Dixit are coming together in Abhishek Varman directorial Kalank. The film stars an ensemble cast which includes Varun Dhawan, Aditya Roy Kapur, Sanjay Dutt and Sonakshi Sinha. As the film's teaser has garnered a lot of attention, the first song 'Ghar More Pardesiya' was unveiled on Monday which saw a glimpse of Varun's character Zafar and the two ladies Alia Bhatt and Madhuri Dixit. 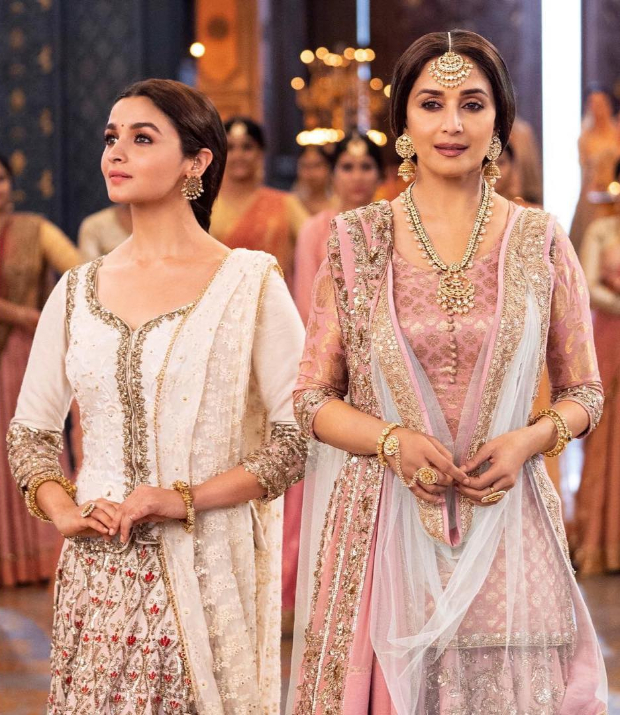 In the song, Madhuri Dixit, who stars as Bahaar Begum, is singing when Alia Bhatt enters the palace and dances around her. Talking about the same, Alia revealed that she was glad and lucky that it wasn't dance off. The actress said that Madhuri Dixit could sense her tension and was constantly instructing her on how to conduct herself. Madhuri ensured that Alia performed the song perfectly keeping all things in mind - expressions to steps. Alia said that doing the spins were the toughest as he lehenga was too heavy and it made it difficult. She was worried whether she had fared well or not. After choreographer Remo D'Souza gave okay on the take, she was reassured.

Alia further revealed that she had trained in classical dance for one year but dedicated two months specifically to this song. She trained under the ace choreographer Pandit Birju Maharaj who helped her crack the expressions. She even consulted him a week before the song was shot.