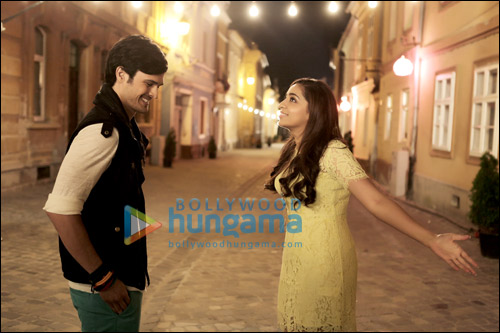 JP Dutta's next film Jee Bhar Ke Jee Le, which is the launching vehicle of his daughter Nidhi Dutta recently went on floors. The film which will be produced under a new youth-centric banner, JP Gene, is directed by Binoy Gandhi and here's the first look of the film which also marks the debut of Ajit Sodhi, actress Nafisa Ali's son.

Actress Nidhi is super excited about her debut in Bollywood and said, "Papa took the muhurat shot which had me speaking a line from his film Refugee. And he was on the sets every day. Once, during an awkward romantic moment in front of the camera, he nudged me aside and stepped in as my proxy. Ajit (Sodhi) was told to caress my cheek, the poor guy just froze," she laughs.

When asked Nidhi about her co-star, she says, "One day I was talking about the film to Ajit who I've known since we were kids, and he had shown interest in it. He was signed by dad for Border 2 and when that got stalled, it was decided that he'd be launched with this film," reveals Nidhi, who entered the picture by offering to speak the girl's lines during a script reading session. "I play a travel blogger in this film which is all about friendship and love."

Nidhi had to lose 20 kilos before she faced the camera, and she was working out in the gym even after she broke her leg, six days before the film started. It is a road trip through Mumbai, Goa, Hampi and Romania. Nidhi says the shoot was like a fairy tale even though the second schedule started with her passing out on the sets. "I had high fever," she explains.

She further adds, "Papa always tells me to do what I love and this is something I love. In the 100 years of cinema, dadaji, Dad and Mom together have been around for 62 years. It's great to take the legacy forward." When asked if she is will be exclusive to JP films only, the pretty lass clarified, "I'm open to films from other banners too."