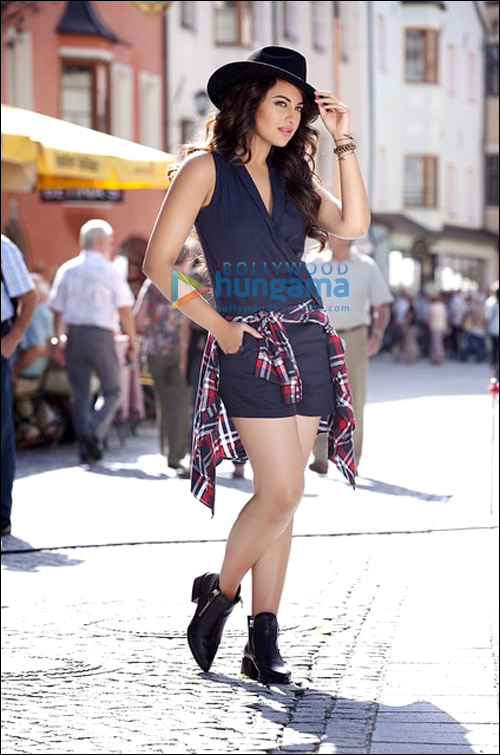 From the saree clad Bengali girl in Lootera to a boxer in Holiday: A Soldier Is Never Off Duty, Sonakshi Sinha has tried out some diverse looks in films. But what we get to see in Action Jackson is a complete different avatar of the actress.


Often seen sporting casual and traditional outfits, this time around, Sonakshi Sinha sports a black short dress with a hat. Ankle length boots, a jacket tied around wait and a small bracelet completes her simple avatar. The reason behind her modern avatar is the fact that some major portion of the film has been shot in Austria. Sonakshi Sinha who is really excited about her upcoming film took to Facebook to post about the picture saying, "My #firstlook in #ActionJackson! You like?" While her fans are obviously thrilled to see this new side of Sonakshi Sinha, the actress too seems to have lost oodles of weight. Not just the actress, but when, Ajay Devgn recently flaunted his well toned body for the first look of the film, it was learnt that the actor had undergone an intense training to get his look right.


Action Jackson is an action comedy that will see filmmaker Prabhu Dheva collaborating with Ajay Devgn for the first time. The film also stars Yaami Gautam, Kunaal Roy Kapur, Rocky Verma in prominent roles. Produced by Gordhan Tanwani under the banner Baba Arts Limited Production, the film is slated to release on December 5, 2014.