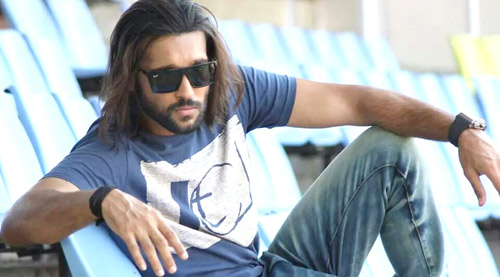 Akhil Kapur, who had carried a dream of making an appearance on the big screen for over half a decade, is an ecstatic lot. Reports suggest that his debut action flick Desi Kattey could well turn out to be the dark horse of the week, which is cluttered with 7-8 releases already. Confident that he would able to make his presence felt amidst a crowd of other actors who have debuted in the year so far, Akhil - who is Vinod Khanna's nephew - is eager that his work is seen by one and all from the industry, so as to gauge feedback from people who have seen it and done all.

I wanted to do something on the lines of action. I am a student of martial arts and though I wasn't quite particular about my first film to be just following that mode, I for sure wanted an intense affair to begin with. I wanted to start with a hardcore drama and a grey part like this with action in there was like a cherry on the cake.

You would have carried certain vision of a dream launch though.

Coming from a filmy background, I did have a fair idea about how I wanted to start my career. My mother's brother is Vinod Khanna and though I have grown up in Dubai, the word spread that I was in Mumbai looking at my stint in Bollywood. I started getting some offers but then quite a few of those were typical love stories and musical romantic drama. I was told that these are what typical launch-pads are made of. But then I am made of different stuff (smiles). That wasn't something that I was looking out for. I wanted to do something different and stand out from the rest of the crowd. Desi Kattey helped me achieve that.

How exactly did it all begin?

Anand (Kumar) had heard about me through some snippet in a newspaper and hence called me. When I met him, he narrated to me a subject that was altogether different from Desi Kattey. Frankly, it didn't excite me at all. Moreover, I too had some other project in the pipeline so I had my heart in there. Fortunately or unfortunately, that project of mine never kicked off.

That must be disheartening?

For a while, yes. But then a year and half later when Anand was making Zila Ghaziabad, he called me again. I still remember that at that time I had taken a break and was in Allahabad for mahakumbh mela. I still think that it was spiritual intervention that I experienced there, though to begin with I wasn't too sure how I wanted to proceed. Nothing was interesting me at that time and I just wanted to clear my head. Meanwhile Anand kept calling me and I said 'Aata hun na yaar'. Later, I went and met him after two-three weeks and guess what, he narrated a love story to me (laughs).

So love stories have a habit to catch up with you more often than not!

Can you believe that (smiles)? I said that 'Anand yaar, please give me something hardcore action. Otherwise aisi love stories toh aati hi rehti hain. After all you have made Zila Ghaziabad, so give me an intense drama where I can do some action and all'. This is when he opened his cards and told me that there was one script he had handy, though he had already locked the film with some established actors. Still, he was nice enough to give me a ten minute narration. At the end of the narration, even before I could say anything, he looked at me and said 'You are my Pali'. That's it; I too said that I would pay him to give this film to me as this was something I had been looking to do all this while (smiles).

What was that exciting something?

To begin with, this part is exactly like that of Tony Montana from Scarface with a Kanpur setting to it. It was fun to be in that mode. This boy wants to go to Dubai, rule the underworld. Though in the first narration I was just happy with the character and had not focused on the story, in subsequent readings I realized that the story too is very beautiful. It is about two friends, Jay and I, their dreams and how they go separate ways, a friction develops between them, and yet there is so much love between the two. That bond really excited me. Moreover, the film has a very interesting climax where my character does define a big part of human nature in a very nice way. It was all very intense and touching, something that I wanted in the first place.

Well, so much so that the heroine in your first ever film is required to be 10 years elder to you. Now that's something, isn't it?

Aah yes! Tia (Bajpai) is playing a character who is 8-10 years older to me in the film. I play this young boy who sees her in the role of a goon's mistress. She is tormented in this relationship and when I grow up, I profess my love for her and get her out of this hell. My relationship with her is very respectful in the film. So you see, even in the love story element in there, I have managed to play it differently (laughs).