Each year we see a number of films hit screes, however from the multitude only a few go on to create an impact at the box office, while even fewer achieve cult status. However, in the recent past, we have seen an increase in the number of films that have been making it to the Rs. 100 cr. mark at the box office. But what makes a film manage to cross this much-coveted mark is the question of the hour. In this infographic, Bollywood Hungama takes a look at the average ticket price of the highest grossers of the year to gain a better understanding, of whether ticket prices played a role in helping a film achieve big numbers at the box office. 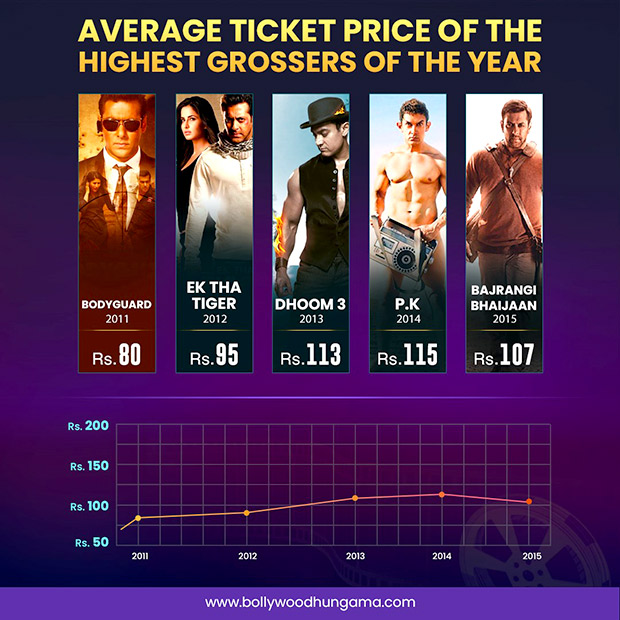 Infographic: Average ticket prices at the box office of the highest grossers of the year (from 2011 to 2015) – Part 1

1. Bodyguard: The Salman Khan-Kareena Kapoor starrer that hit screens in 2011 collected Rs. 148.86 cr. at the box office, interestingly the average ticket price for the film was Rs. 80. Given the fact that usually, Salman Khan films work in mass-dominated and single-screen sectors, it is obvious that the pricing would be lower than multiplex rates that have become a norm.

2. Ek Tha Tiger: Released in 2012, this Salman Khan-Katrina Kaif starrer featured an average ticket price of Rs. 95. As compared to the previous film, Ek Tha Tiger raked in closer to Rs. 200 cr. at the box office ending its theatrical run at Rs. 198.78 cr.

3. Dhoom 3: The third installment in the Dhoom franchise featuring Aamir Khan and Katrina Kaif was promoted on a massive scale. With an average price of Rs. 113 per ticket the film went on to become one of the highest grosser with collections pegged at Rs. 284.27 cr.

4. P.K: Another Aamir Khan starrer PK that also starred Anushka Sharma released in 2014 saw its ticket price remain more or less similar to the previous year’s release. Pegged at Rs. 115 per ticket the film that was directed by Rajkumar Hirani raked in Rs. 340.8 cr.