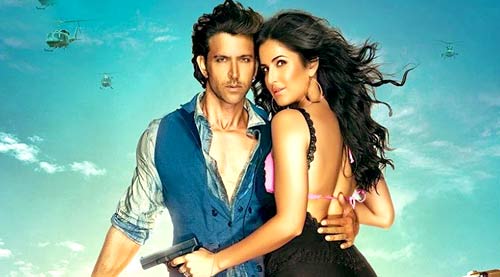 It is now confirmed, and comes straight from the horse's mouth. Fox Star Studios has produced Bang Bang for a whopping budget of Rs. 140 crores (including Prints & Advertising), hence giving it the status of one of the costliest films ever made in Bollywood.

Here is the complete lowdown of what contributed to it, and whether a lesser cost would have at all been justified.

1. Bang Bang has Hrithik Roshan and Katrina Kaif, two of the biggest superstars of the country, in the lead. No prizes for guessing that they are also two of the highest paid actors in the country. A good chunk of moolah goes there.

2. From Day One, the USP of some never-seen-before action is being widely spoken about in not just the industry circles but also audiences. A promise has been made that Bollywood would witness something unique. Assurance comes from the fact that Hollywood action director Andy Armstrong (The Amazing Spiderman 2) was roped in to deliver these breath-taking, death-defying stunts. Creating this spectacle definitely needed the best crew in the business or else it would all have looked shoddy. Some of the notable action sequences involve Hrithik driving a F1 car, performing water-ski after being tied to a sea-plane and do the fly board stunts. While such sequences are a first for any Bollywood star, needless to say that the cost incurred on it is huge as well. Of course, from the perspective of helping the film gain good eye balls, the job is done, what with the visuals being enticing enough for a big screen extravaganza.

3. The very genre of the film, which is that of being an adventure affair. With action-romance thrown in for good measure, the stars were required to travel across the world so as to join the dots and solve a mystery which forms the core of Bang Bang! The story travels through Prague, US, Thailand and Greece amongst other countries and the idea was to keep a non-compromising approach on the scale of the film while giving the story its due.

4. With big vision comes bigger risk - the adage couldn't have been truer here! Director Siddharth Anand wanted to create something larger-than-life and the producers too stuck their necks out to help him achieve that. The film was accordingly granted its mammoth budget.

Says an insider, "Bang Bang is now the hottest film of 2014, a must watch that is riding on super buzz. A compromise on the vision would have completely botched up the look and feel of the film. So kudos to the studio and Siddharth Anand to not get jittery and finishing what they started out to do, which is to make a film that has never been made in Bollywood. Bang Bang has redefined the action genre. It might be a while before any Bollywood actor does an action film of this scale as it would be difficult to match the vision of Bang Bang."

We would know once the film releases this Thursday, October 2.