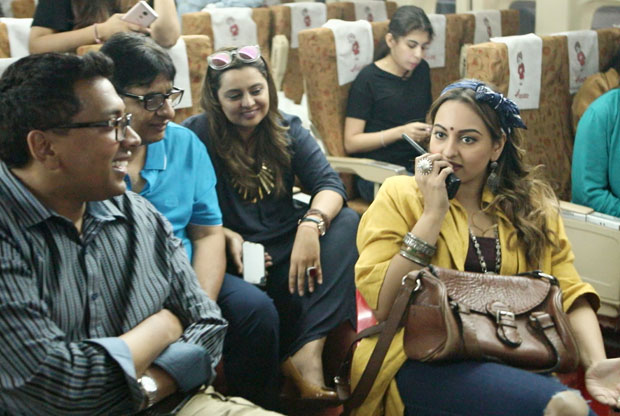 Vashu Bhagnani’s next is one of its kind, courtesy the film is based on the recently held IIFA awards and showcases the happenings at an awards gala with a tinge of humour. It is known fact that it has been extensively shot in New York & London with Sonakshi Sinha and Diljit Dosanjh in the lead roles.
While Sonakshi Sinha has started shooting the same with her co-stars, we hear that the actress keeps the unit in splits and in attention all at one time. One such incident was revealed by a little birdie from the sets of the film. The source said, “When the movie was being shot in Mumbai, the bubbly Sonakshi got all the assistant directors to find her continuously by making an announcement from the director’s walkie.”

Sitting on the set next to her director, she kept announcing for about 15 minutes in a changed voice that Sonakshi was not on the set and the shot was ready. The assistants kept looking for her until they realised it was a prank played by the actress. She definitely proved that besides being a hard working actress she is also a pro prankster. The source added, “The whole unit adores the lively and crazy side of Sonakshi Sinha who possesses great voice modulation skills.”

Talking about the incident, Sonakshi said, "Chakri [Toleti] sir is really funny and it helps to have such a jovial personality while you are shooting a funny film. It’s been wonderful working with him. I have always liked Diljit [Dosanjh] as a singer and as an actor too, and to be able to work with him in this space is great."

On the other hand, producer of the film, Deepshika Deshmukh said, “Sonakshi's positivity is so contagious. She made working long hours, rather fun. The entire unit just loves her for the chirpy and lively person that she is. She has been an absolute delight to work with and made working fun with her sweet pranks on the sets.”

Apart from the two, the film is rumoured to have lots of great cameos from a number of stars from the industry. It is India’s first ever staged reality film and is reportedly tentatively titled Crazy Hum.