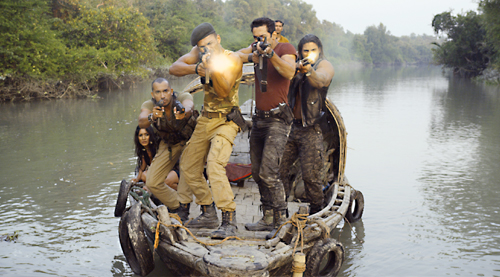 Shooting in one of the most dangerous and mysterious locations in the world is a challenge that the team of Roar: Tigers Of The Sundarbans willingly accepted. Translating the beauty and danger of this place on to the big screen is a task that producer Abis Rizvi and Kamal Sadanah achieved using cutting edge technology and a talented international crew. Aerial cinematographers Ville HyvÃ¶nen and Kristjan Tiimus were specially flown down from Helsinki for the film.

Camera equipment worth thousands of dollars was mounted on a rig with blades with a platform built on a boat to take off and land. The aerial rig was used to film master shots for not just the action sequences but some dramatic scenes as well. Single shots consisted of the camera going from the close up of an actor to a few hundred feet in the sky only to capture birds flying in the foreground.

But one of the most noteworthy shots to be filmed by Helicam was a "Time Slice" shot. It usually takes at least 90 cameras to capture this but with the manipulation of speed of film synced with movement of the aerial rig, this team from Helsinki successfully achieved a shot never even attempted by Hollywood veterans

The quality and level of photography and action in Roar can easily rival Hollywood films and is going to be a path-breaking project in Bollywood.

Roar: Tigers Of The Sundarbans, produced by Abis Rizvi, releases on October 31.