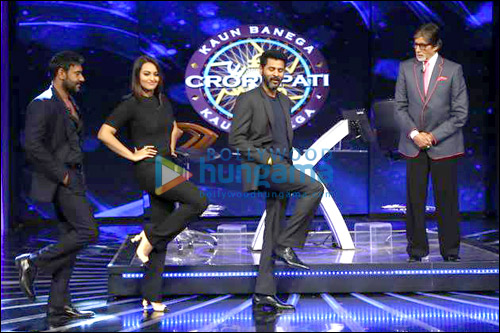 Last time, it was father-son duo who kept the audience entertained on the sets of the quiz show 'Kaun Banega Crorepati'. Abhishek Bachchan along with the team of Happy New Year, as a part of the promotions, were the special guests on this show, hosted by his father Amitabh Bachchan. Now, the next celebrities to visit the sets of 'Kaun Banega Crorepati' are Ajay Devgn, Sonakshi Sinha and Prabhu Dheva.

The trio came to promote the upcoming film Action Jackson. While Ajay Devgn and Sonakshi Sinha will be on the hot seat answering the questions thrown towards them to earn money that will be donated to a charitable trust, Prabhu Dheva will be appearing on the show to encourage his lead star cast. However, the filmmaker, along with the actors will be seen shaking a leg on stage in this final episode of this season. Talking about shooting with the team of Action Jackson, Amitabh posted about it on his Facebook wall saying, "KBC approaches its end almost and there is that feeling of a withdrawal .. there is music and dance and much else to recover .. so I shall discover, and learn and exhibit and perhaps at one time in the know of more than what I should averagely .."