Earlier this weekend, Ananya Panday decided to shut down trolls that accused her of faking her USC admissions by sharing evidence of the same on her Instagram page. Ever since the film Student Of The Year 2 started making news, Ananya, who made her debut with this film, had to tackle nepotism controversy.  During the promotions of the film, when the actress stated that she decided to try her hands in films despite the fact that she got through USC admissions. Her comment soon led to trolls calling her out and claiming that she had lied about these admissions.  However, the actress shut down these trolls bravely by sharing photos of her admission certificates. While many Bollywood celebrities came out in support of the newbie actress, amongst them was also Arjun Kapoor who had a few words of advice to share! 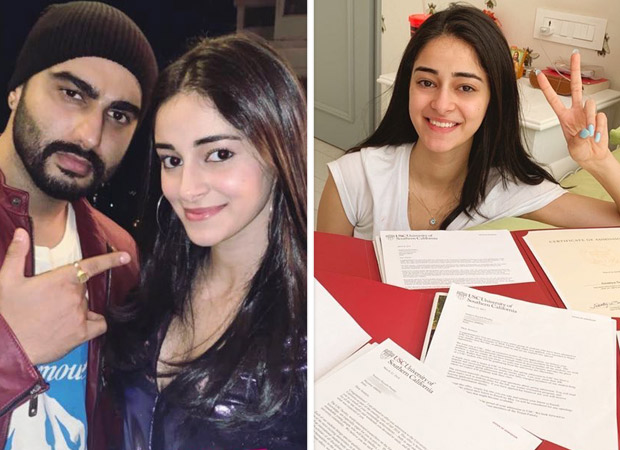 Arjun Kapoor, cousin of Ananya Panday’s bestie Shanaya Kapoor, had the smartest advice for the newbie actress asking her to move on in life. He said, “Ur friends & family know the truth n that’s all that should matter... Haters gonna hate broooo !!! Aage badho life mein....” Many other celebrities like Shanaya’s father Sanjay Kapoor, one of Chunky Panday’s former co-stars Neelam Kothari came out in support of Ananya and appreciated her post on Instagram. 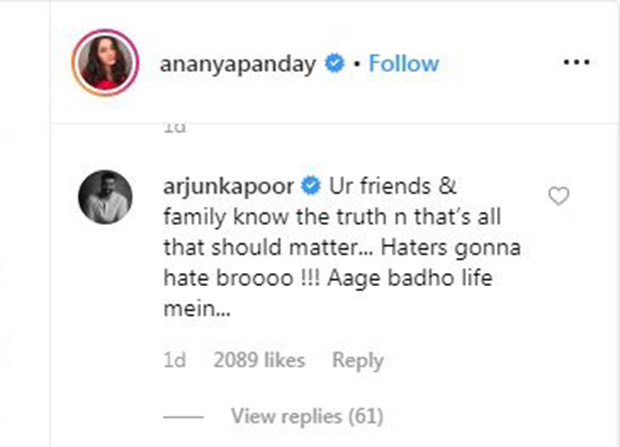 For the uninitiated, here’s what Ananya had to say in the post, “I didn’t want to do this. I didn’t feel like I needed to explain myself to anyone, but the rumours that I faked my admission at USC have been doing the rounds for a while now. They've been getting out of hand, and it’s even more unfair and sad that my family and friends have to go through this. As I've stated earlier, I was accepted by Annenberg School for Communication and Journalism at USC for a major in Communication in the Spring 2018 semester. But since I was shooting for my first film and the release date later got pushed, I had to request for a deferral (which means postponing my admission) twice - first to Fall 2018 and later to Fall 2019, both of which they gracefully agreed to do. In my case, I could only defer my admission two times so I will not be attending university (for now), since I’ve decided to pursue my career in acting. As for the people who have been trying to pull me down with these accusations, I would like to send you all lots of love, peace and positivity. And would also like to say that even though they’re claiming to be my classmates (nameless and faceless) - I'm sure they aren’t because I’ve grown up with the people I went to school with and they would never do something like that. It's never okay to bully anyone - creating fake conversations, stories and screenshots is very dangerous and can seriously damage people’s lives. So please be loving, positive and kind. ❤ (PS - my father’s real name is Suyash and I blurred out my address for security reasons).”