Last Updated 18.05.2022 | 8:55 PM IST
feedback language
follow us on
Bollywood Hungama » News » Bollywood Features News » Sonam Kapoor Ahuja is all smiles as she poses with Karisma Kapoor and Malaika Arora on her birthday

Sonam Kapoor Ahuja ringed in her 34th birthday in utmost style as she partied with her gal pals that include some of the biggest celebs of Bollywood. She is known to throw some of the best parties in B-Town and her birthday bash was no different than the others. She looked absolutely stunning in a low-cut white shirt and a champagne colored pleated skirt. Her birthday was attended by most of the leading ladies of the industry. 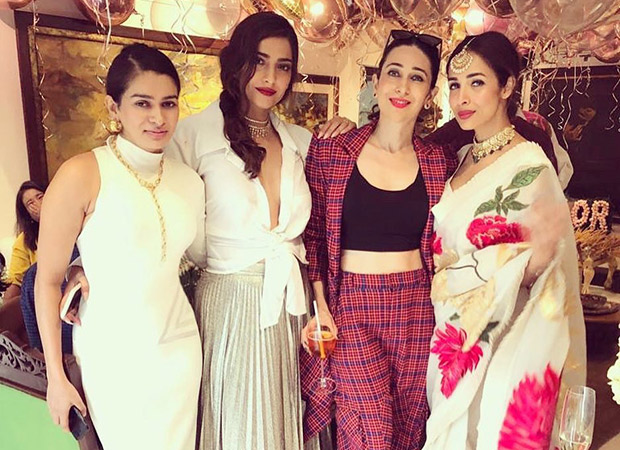 She was seen striking a pose with Karisma Kapoor, who was dressed in a stunning plaid pant suit by Prabal Gurung, and Malaika Arora, who looked ethereal in a Rohit Bal saree. The three ladies were accompanied by Tanya Ghavri, the celebrity stylist who happens to be a really close friend of theirs. Tanya uploaded the picture with the caption, “Birthday girl ???? ???????? @sonamkapoor ????@therealkarismakapoor @malaikaaroraofficial #lovelove”

Take a look at these gorgeous women put their best foot forward when it comes to fashion.

Sonam Kapoor Ahuja will next be seen in The Zoya Factor and will share the screen space with Dulquer Salman for the first time.