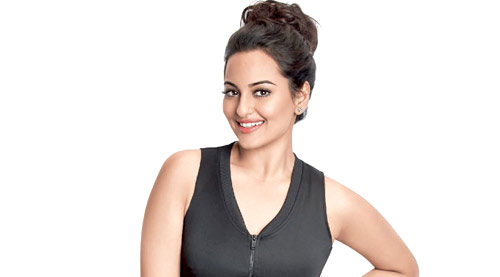 Compared to earlier years, 2014 has been relatively easy paced for Sonakshi Sinha, as far as her film releases are concerned. So far she has been seen only in Holiday, though things would speed up soon, now that she has Action Jackson lined up for release followed by Lingaa. This isn't all as early next year she would be embarking on a new start with Tevar. Meanwhile she has kept herself busy with shooting assignments and is happy not to have an off day. In fact when we caught up with her, she was just signing off the day after spending hours for the shooting of an ad. That's Sonakshi Sinha for you - Busy, Engaged and Happy!

Even though Ajay Devgn is leading the show in Action Jackson, it is expected that you must be indeed adding a lot of weight to the plot.

I think I have done enough work in the industry for people to take me more than just eye candy or arm candy. Yes, I have taken that route in my first few films but now the roles are getting much better and my relevance and weight as an actor is visible. Comedy isn't easy but I have pretty much played a comic part in Action Jackson and I am happy about it.

You have also built some good camaraderie with senior actors like Ajay Devgn, Akshay Kumar and Salman Khan. Guess it is your easy going nature that helps out in that as well, right?

Yes, and for starters I don't have too many hang ups. I get along with everybody I meet or work with. I don't get overtly personal. I form a good working relationship with people though as I truly believe that it takes you a long way as a professional. It has never been said that I have not got along well with any co-star, or there have been issues with someone. That's because it has never been the case. With most of the people, I have worked in more than one movie, and I give myself a pat on the back for that (smiles).

You can also give yourself a pat on the back for losing a lot of weight and coming up with this ultra chic avtar by cutting off your hair.

(Laughs) Come on, I have just cut my hair, it was long overdue. Since I am not in the middle of shooting and basically promoting my three films, I can afford to do that. As for my weight, honestly I have not lost it per se, it is just that I have got much fitter, and I love it!