The 2020 Grammy Awards took place at Staples Center on January 26, Sunday which saw several performances and much-deserved award wins. Billie Eilish took home all major awards making her youngest artist to do so in the history of Grammys. It was also the night when Demi Lovato made her comeback on stage. 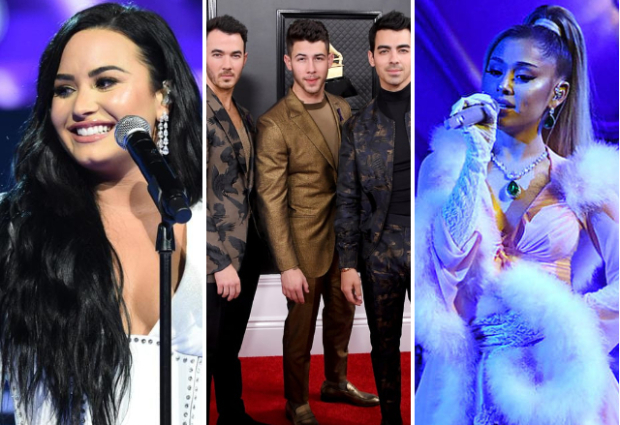 Demi Lovato gave an emotional performance on her new song 'Anyone'. Dressed in all white, he kicked off her song but restarted her set again as she was overwhelmed with emotions. The singer was in tears during her entire performance. In the end, she received a standing ovation from the audience. It was Lovato’s first live performance since July 2018 when she suffered a nearly fatal overdose. The song was released online post her performance.

Jonas Brothers - Kevin Jonas, Joe Jonas, and Nick Jonas - also gave peek of their new song 'Five More Minutes' which was followed by 'What A Man Gotta Do'. Their wives - Danielle Jonas, Sophie Turner, and Priyanka Chopra - were cheering for them from their seats.Ariana Grande, who was nominated in multiple categories, performed several of her songs including 'Imagine' followed by 'My Favourite Things' and '7 Rings'.Camilla Cabello did a 'First Man' performance and dedicated it to her father who sitting in the audience. Her father was overwhelmed with emotions as he teared up during her set. After the end of her song, she went to hug him.