South Korean actor Lee Dong Wook has charmed the K-drama audience with his smile and flawless acting. He shot to international fame after appearing in the 2016 hit fantasy romance drama Goblin or Guardian: The Lonely and Great God. He played the role of a grim reaper in the drama, and since then he is often referred by his character when fans speak about the actor. The bromance between his and Gong Yoo’s character is one of the most loved on-screen bromance pairings. His latest fantasy romance drama Tale of the Nine Tailed is one of the most popular dramas on 2020. The drama will soon have sequels with Lee Dong Wook reprising his role as Lee Yeon. 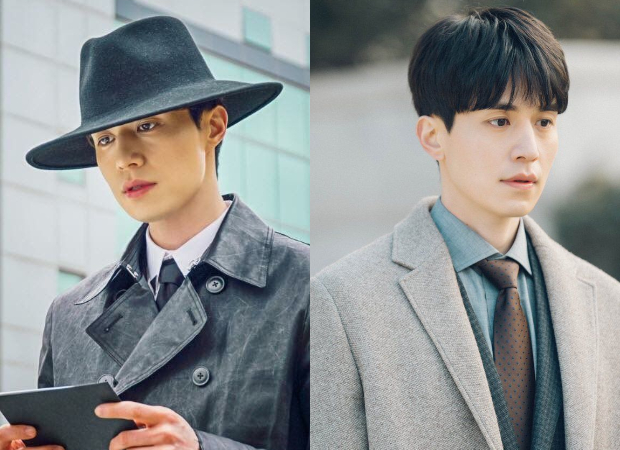 The actor, who turns a year older today on November 6, has delivered quite memorable performances not only in K-dramas and movies, but also variety shows like Return of Superman. Let’s us take a look at some of the ‘must-see’ K-dramas and movies from Lee Dong Wook’s filmography.

In Heartbreak Library, Lee Dong Wook plays the role of Kim Jun Ho, a lovelorn person who visits the library and rips of page 198 of any book he can find. Eugene plays the role of Cho Eun Soo, a librarian at the library visited by Jun Ho. He is accused of vandalism, but Eun Soo soon finds out the reason for his actions. His girlfriend left him without leaving any trace and only said ‘Look up page 198’ without telling the book’s name. Heartbreak Library is an emotional tale of love and loss. The movie is adapted from the novel “There, You?” by author Yoon Seung Hee.

Lee Dong Wook plays a small role in The Recipe, but the movie is worth watching nonetheless. The plot follows the story of Jang Hye Jin, a woman who is known for making delectable soy bean paste stew. Lee Dong Wook is shown as Jang Hye Jin’s lover, Kim Hyun Soo. Actor Rye Seong Ryong plays the role of Choi Woo Jin, a detective who delves further into Jang Hye Jin’s story to learn more about her affair with Kim Hyun Soo.

No K-drama listing is truly complete without a love story between a chaebol (rich heir) and a regular working-class woman. Scent of a Woman is that one drama from this list. This Lee Dong Wook and Kim Sun Ah starrer drama was loved by the audiences back in the day when it was released. There is romance, there is awkward laughter and to top it all, there is melodrama with the female lead being diagnosed with a life-threatening disease.

KANG KOO’S STORY (2014)
Lee Dong Wook plays the role of Kyung Tae, a rugged cold-blooded person who is deemed as ‘good for nothing’ by the society. He is given the responsibility of taking of his dead friend’s sister, who is also sick. The sister, Moon Suk, also has a son, Kang Koo. While taking care of Moon Suk, Kyung Tae eventually falls for her. The drama is just over an hour long, but it the scenes and storytelling are engaging to watch.
THE BEAUTY INSIDE (2015)

Before the 2019 drama, The Beauty Inside starring Seo Hyun Jin and Lee Min Ki, came the movie of the same name starring Han Hyo Joo in the lead. This Korean movie is in turn based on the 2012 American social experiment film of the same name. Lee Dong Wook plays a small role in this film. He is one of the characters that Woo Jin transforms into.The Beauty Inside also marks director Baik’s debut feature film.

GOBLIN OR GUARDIAN: THE LONELY AND GREAT GOD (2016)

How can one speak about Lee Dong Wook and forget the international hit drama Goblin? The cast of Goblin shot to a newfound fame after the drama was aired. Lee Dong Wook played the role of a Grim Reaper, and his deadpan expressions along with his comic timing were fan favourite. The drama tells the story of Kim Shin, played by Gong Yoo who is looking for a bride who can pull out the sword and end his life.

After romances and melodramas, it is time for some hard-hitting thriller dramas. The drama Life narrates a story about power and politics at a hospital. The hospital is used as a ground to satisfy personal vendettas, instead of focusing on saving people’s lives. Jo Seung Won plays a negative role in the film as the CEO of the hospital, whereas Lee Dong Wook plays the role of Ye Jin Woo, a doctor who is dedicated towards selfless service for the patients. The clash between them gives path to discussions about morality, public service and power.

Lee Dong Wook and Yoo In Na’s pair was loved after their appearance in the drama Goblin. The couple made a return in the drama Touch Your Heart, which is a quirky and cheesy romantic comedy. Lee Dong Wook plays the role of Kwon Jung Rok, a no-nonse lawyer, whereas Yoo In Na is Oh Yeon Seo aka Oh Jin Shim, an actress who works as a lawyer’s assistant to gain experience for her next stint. The two are opposites in many ways, but the ice soon melts and love blossoms between the two.

Lee Dong Wook showcased his versatility in 2019 with two different dramas like Touch Your Heart which is a completely funny and cheesy rom-com, and then Strangers from Hell which falls into the nail-biting horror-thriller genre. Starring Im Shi Wan in the lead as Yoon Jong Woo, Strangers from Hell is adapted from a webtoon of the same name. The drama tells the story of mysterious encounters in the cheap hostel building where Jong Woo stays in order to save up money. Lee Dong Wook plays the role of Seo Moon Jo, a charming yet mysterious dentist. Ahn Eun Ji and Lee Jeung Eun appear in supporting roles in the drama.

Tale of the Nine-Tailed is the drama you go to when you want to watch romance, deities with stunning past story and heartfelt bond between siblings. Tale of the Nine-Tailedtells the story of romance between Lee Dong Wook’s character Lee Yeon and Jo Bo Ah’s character Nam Ji Ah. Lee Yeon is a gumiho (nine tailed fox) who was a mountain god once. What follows next is a tale of love, loss and betrayal. The drama brought a new found fame to Kim Beom, who played the grey character and Lee Yeon’s half brother Lee Rang. His character became such a fan favourite that there was three-episode special spinoff for his past story. The drama will soon have two sequels which are said to air beginning sometime in 2022.

While fans wait for his next K-Drama, Lee Dong Wook was recently seen in variety show Sea of Hope with Yoon Jong Shin, SHINee’s ONEW, Lee Ji Ah, Lee Dong Wook, Kim Go Eun and Lee So Hyun as regular cast members. The sextet showcased their culinary skills, singing prowess and more as they unwind by a seaside bar. The cast also got together to croon yesteryear hits like ‘Stand By Me’ which was a part of the OST for the 2009 drama Boys Over Flowers. The show is healing and calming to watch, and just what one needs to unwind after a week of work!

Meanwhile, Lee Dong Wook will next star alongside Squid Game star Wi Ha Joon in upcoming quirky drama, Bad and Crazy. He is also set to star in next two seasons of Tale of the Nine-Tailed.