Saif Ali Khan is one of the first mainstream actors in India to make their way into the digital platform. The actor was seen in Netflix's first Indian original series called Sacred Games alongside Nawazuddin Siddiqui and Radhika Apte. The gritty drama received critical acclaim and rave reviews from the audience. The show has been directed by Vikramaditya Motwane and Anurag Kashyap. The filmmakers have been in the middle of the controversy as their former partner Vikas Bahl has been accused of sexual harassment. Even writer Varun Grover has been accused by an anonymous woman of sexual harassment but the writer has denied all the allegations. Meanwhile, Netflix gave greenlight to the second season after apparently following proper protocol and investigation. 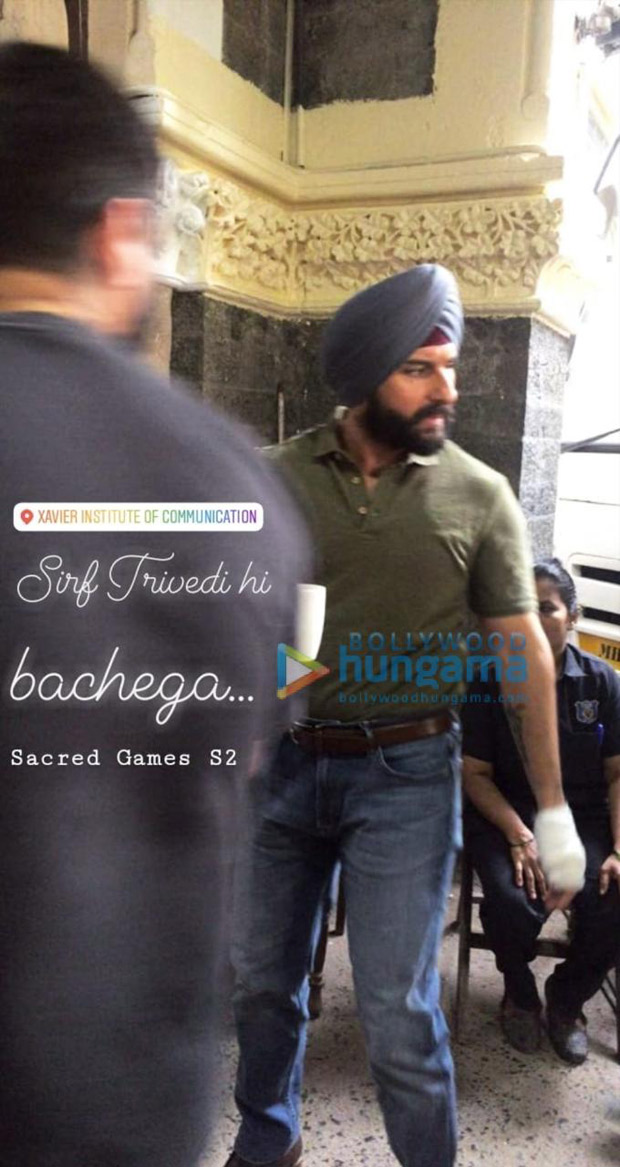 Now, we have an exclusive photograph of Saif Ali Khan who began shooting for Sacred Games 2 this week in Mumbai. Reprising his role as Inspector Sartaj Singh, he was donning an olive polo neck t-shirt with denims and turban. In the last season, his finger was chopped off during the climax scene. He had a bandage on his hand as he began shooting at Xavier Institute of Communication which is set up for the police headquarters. He will be soon joined by Neeraj Kabi who essayed the role of Parulkar in the series.

Based on Vikram Chandra’s novel by the same name, Sacred Games is a crime drama that delves into the dark and gritty world of Mumbai city and features Saif Ali Khan in the role of Inspector Sartaj Singh. The show will also star Nawazuddin Siddiqui in the prominent role of gangster Ganesh Gaitonde whereas Radhika Apte plays the role of RAW analyst Anjali Mathur. Based on reality, the series will trace the deep nexus of crime and politics as it takes you through the life of a police officer named Sartaj Singh.