One of the highly anticipated films of the year is Rajkumar Hirani's upcoming directorial which is Sanjay Dutt biopic. Starring Ranbir Kapoor in the lead, the film is easily the most awaited films of 2018. The makers are working hard to get the movie ready for the June release. While the insiders claim the film will easily push the envelope of biopics in Bollywood, it is only increasing the excitement. As the teaser of the awaited film is only a day away, we finally have the first look of the film and it looks absolutely amazing. 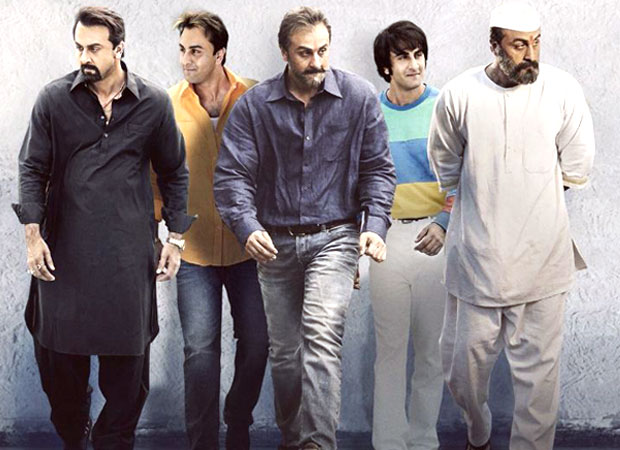 The first poster of Ranbir Kapoor starrer was revealed this afternoon with the title of the film. Titled Sanju, the poster showcases the actor in different avatars. From Sanjay Dutt’s Rocky days to Munnabhai comeback to the days after release from jail, all of them have been captured beautifully on the poster. Ranbir Kapoor looks unrecognizable. In his Rocky phase, he is sporting the wide-legged white pants with colourful stripped shirt. In the later phase of his life when he made comeback with Munnabhai MBBS, he is dressed in the signature look as Munna in orange shirt, ganji and denims. In the later phases of Dutt’s life, Ranbir is seen in the iconic looks in black pathani, full white kurta pyjama.

As mentioned earlier, the young actor has undergone a drastic physical transformation to fit the part and will be seen in 6 different looks tracing the life of Sanjay Dutt. Ranbir Kapoor surprised the audience with the striking resemblance to Dutt as pictures from sets hit the internet last year. The actor not just embodied the looks of Sanjay Dutt but also learned the nuances and accent of the actor. The team underwent tremendous research for the film including watching almost more than 200 hours of footage for the film.

Produced by Vinod Chopra Films and Rajkumar Hirani Films in association with Fox star studios, the Sanjay Dutt Biopic Sanju is all set to be released on June 29, 2018.

"Our solutions are in nature"- says Dia…