Last Updated 25.01.2022 | 10:40 PM IST
feedback language
follow us on
Bollywood Hungama » News » Bollywood Features News » With film shoots cancelled, here’s what your favourite celebrities are up to under self-quarantine

With the increasing number of positive cases of coronavirus in India, the government has advised everyone to take precautionary measures. While the government has advised people to stay away from crowded places, they have also announced a shutdown of public places like malls, gyms, swimming pools and cinema halls. On Sunday, several film and television bodies had announced that shooting for films and television will come to a halt starting March 19 to March 31. 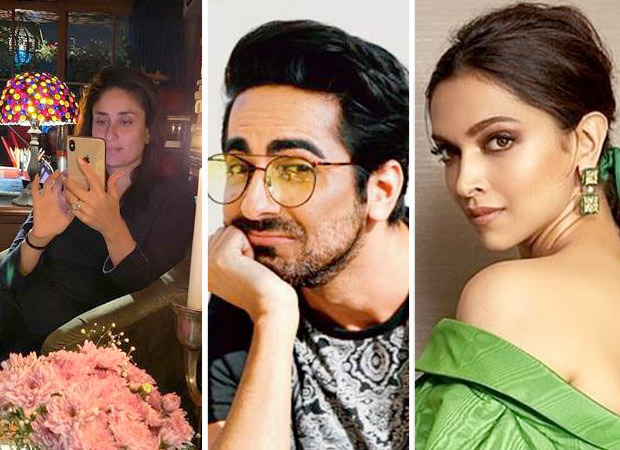 However, filmmakers had already announced the cancellation of shoots including films like Jersey, Laal Singh Chaddha and Bhool Bhulaiyaa 2 among others. Actors and the rest of the crew have already come back to their respective houses and are under self-quarantine. Amidst this, Bollywood celebs are putting to the best use their social media handles by advising people to stay at home and safe.

However, people, especially in metro cities, are used to the fast-paced life and during this time of crisis are wondering what to do. While binge-watching is always an option, here’s looking at what all the B-Town celebs are doing in their free time:

For most of them including actors like Priyanka Chopra Jonas, Kareena Kapoor Khan, Malaika Arora, Ayushmann Khurrana and Saif Ali Khan, it is family time as they have been sharing pictures of spending quality time with their loved ones:

Love in the time of corona #covıd19 #selfquarantine #caspernme..... stay safe everyone????... thank u my arhaan for the pic

Staying home during this time is the safest thing to do. @ginothegerman giving mommy hugs makes it so much better.. ???? @Cavanaughjames

Art at home! Four of us painted together after a long time, guess who has made which painting! Also a reason to post this is to plead with all the parents to maintain safety and one way of doing that is to understand why schools and public places have been shut. Let’s not encourage group classes where coaches and teachers come home to teach. The purpose is being forfeited. Let’s please stay at home and contribute to containing the virus to the best of our capabilities ❤️????

Or some can take inspiration from actress Deepika Padukone who has decided to clean up that wardrobe which you probably have been neglecting since ages. Or if you are still lazy, then just soak up in the sun like the gorgeous Kareena Kapoor.

Productivity in the time of COVID-19!???? #cleaning #wardrobe

And then we have Bollywood's very own Mrs Funnybones who has a 'gin to bear it all'.

When you can’t grin and bear it, then it’s time to have a gin to bear it, or at least that’s what I tried to do this Sunday :) I read something very interesting as well yesterday, ‘We should not worry about getting the virus but we should modify our behaviour as if we already have it and don’t want to infect others, as that is the only way to contain it.’ And @deepshikhakhanna love this outfit from @goodearthindia but love you even more ????

Sara Ali Khan is currently visiting Banaras as she was shooting for her upcoming film. While such crowded places are not advised, we will wait to see what the bubbly actress will be up to after March 19.

The government has advised for gyms to shut down, but that in no way means celebs stop working out. Actresses like Katrina Kaif and Jacqueline have advised people to start working out at home as it is also a good way to boost your immunity. Check out:

Paucity of time is a major reason for missing out on exercise for many. Let’s utilise this 'precious' time to take care of ourselves by exercising at least 4 times a week and building a stronger immunity. Here’s how you can pack in a proper routine using just the staircase. Practice this anytime during the day (preferably after an hour of eating). You don’t need to come in contact with anyone else for it. Swasth raho, mast raho! ???????? . @thevinodchanna . . . . #MondayMotivation #COVID19 #SwasthRahoMastRaho #FitIndia #GetFit2020 #staysafe #stayhome #fitness #time

Meanwhile, keep watching this space as we give you an update on what B-Town does when they are not shooting.