After a sensational solo debut in 2020 with the eponymous mini album KAI, South Korean group EXO member KAI has returned almost a year later with his second mini-album Peaches. The mini-album was released on November 30, 2021. Featuring six tracks which showcase a much softer, and peachier side of KAI, Peaches is a dreamy package. Departing from the sultry style of his previous album, KAI approaches love and admiration for a person with this comeback album. 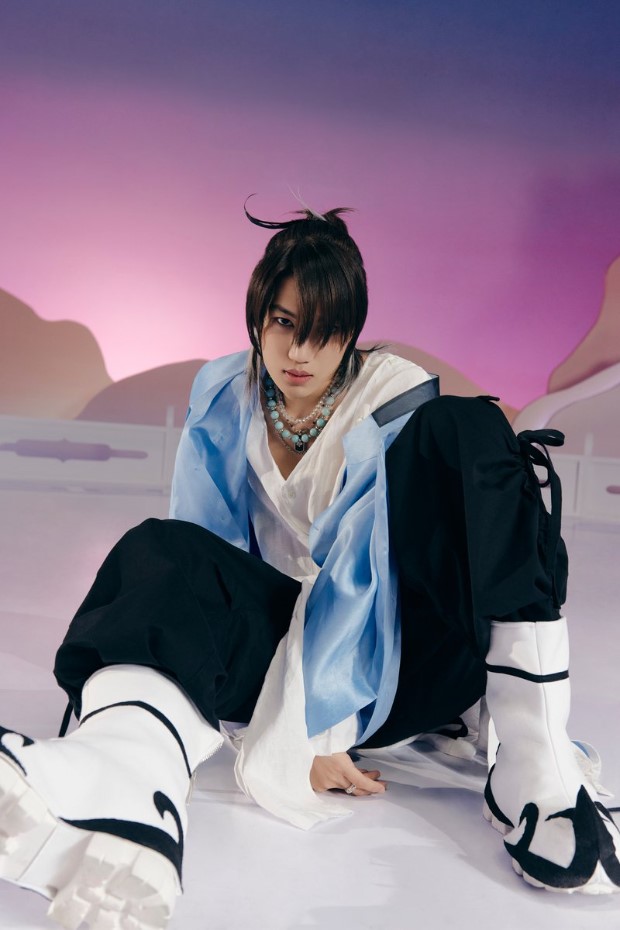 The title track borrows its name from the album name. ‘Peaches’ is replete with peach imagery, right from the lyrics, to the setting to the choreography. It is fruity, it is delicious, and it is cozy. Kai incorporates modern R&B music with traditional oriental music for the title track. Mixing Western and Eastern music influences and folktales in the music video makes the song even more alluring. The use of pastel pinks with an occasional splash of white accentuates the theme of ‘peaches’ even further. The melodious confluence of slow electro beats with Kai’s cushy vocals wrap the title track in a seductive looking package.

The next track, ‘Vanilla’ is a classic indie-pop song. Even with this track, Kai experimented with traditional and modern music. The slow bridge leads the way to an elevated chorus, owing to the switch in the music. The song drips the sweetness of a vanilla flavour, and leaves a lasting taste with lyrics that go “A drowsy song lingers on the tip of my tongue / My fingers are filled with you, you are sweet.” Kai temps down his vocals almost to a raspy register and expresses the sugary-sweet emotions.

Next up is ‘Domino’, which is different from its slow and raspy predecessors. While the previous two were soft and spoke of love, Domino speaks about following one’s heart regardless of other’s opinions – “Throw away all your thoughts (All your thoughts / Collapse like dominoes.” The hip-hop track also showcases a different side to Kai’s singing as he takes on a more serious and tonal approach with the vocals. The 808 bass beats add a great oomph to this track.

Come In presents a mix of trap and R&B music. It is a track about passionate love that has entranced one’s mind. The song exudes a sensual and alluring charm with lyrics like “I tend to get tirеd of sweet flavors quickly / Yet somehow, you always feel new / Thе danger is already spreading beyond my control.” The trap beats accompanying the chorus verses add in to the song’s charm.

The fifth track from ‘Peaches’ is ‘To Be Honest’. The track is about being honest in a relationship and uses bass beats and snaps to add a funky spin. To Be Honest presents a beautiful imagery with words like – “We're like a decalcomania / We paint the same thoughts / We just didn't express them on the outside.” The song is different from its predecessors in terms of musical execution, but the it matches with the laid-back vibe.

The concluding track on the album, ‘Blue’ gives out matching blues vibe with lo-fi guitar and piano melodies. The song speaks about the loneliness and tiredness – “I'm like this everyday / I get tired again everyday, everyday.” Kai sings in breathy vocals at some parts and it elevates the emotions depicted in the song.

When he made his solo debut last year, Kai showcased his artistry which is beyond what is projected as EXO’s ‘main dancer’. There was more to him which he explored in his first album. With Peaches, he discovers and explores more of his musical capabilities and that’s why each track is more nuanced and meticulously added in the album. Sonically, they are so different from one another. With each other, he’s also diving into his sensibilities, self-reflection and it perfectly sums up in the album.  Overall, the album is an easy listen and everything falls into place.