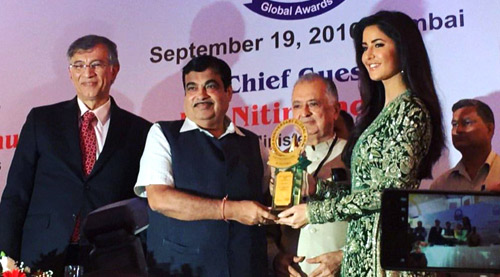 "98.5 % people hating Katrina Kaif getting Smita Patil award are just jealous of her success and other 1.5% don't know what they are talking about," tweeted Ram Gopal Varma. This tweet is symptomatic of how RGV has stopped being relevant and why he himself doesn't take himself seriously any more. The whole debate on whether Katrina Kaif deserved the Smita Patil award (conferred on her yesterday) is futile. Bollywood Hungama will tell you why RGV and everyone defending Katrina Kaif just don't know what they are talking about.

RGV and Swara Bhaskar have spoken at length about how hard working Katrina Kaif is. No one has ever debated that. Yes, she was an outsider who toiled hard, learned Hindi and she practises her dance steps till everyone around her drops down in sweat. One must also take it into account that her proximity to Salman Khan surely worked to her advantage in a big way and it continues to do even today.

If Katrina Kaif would have been felicitated with an award in the name of Zeenat Aman, it would have been perfect. Both have been trendsetters with their style quotient, great at dancing, have been thorough professionals and have delivered occasionally compelling performances as actors.

Why Katrina Kaif is not deserving of an award in the name of the late Smita Patil is because hard work of Katrina Kaif doesn't equal to great acting that was associated with the late Smita Patil. You don't have to necessarily work hard at being an actor. Some people are gifted while others work at themselves in entirety. It is often said about Konkona Sen Sharma how effortless she is when she goes before the camera or the method to the madness that Tabu brings to her magical performances. Vidya Balan works very hard at weaving roles and leaves behind memorable characters instead of the persona of Balan.

When you speak to great actors, they shall tell you what all do they do apart from their stint with show business. Aamir Khan likes to read books rather than watching movies all the time. There are others who love to travel to develop a better understanding of the world by meeting new people and learning from them. Someone like Abhay Deol keeps travelling to USA to do acting workshops or to do courses pursuing certain hobbies.

Katrina Kaif has been a top box office phenomenon, who's currently struggling to find her footing in this current burst of fresh new talent.

She has seen tremendous box office success owing to hit songs (picturised on her) and also backed by the star power of the Khans or Akshay Kumar. She's most certainly one of the most recognised Bollywood faces in the last decade…but, is she a great actress? No, she's not. Does she deserve an award conferred in the name of the late Smita Patil? No, she doesn't. Are people jealous of her, as RGV says? Most certainly yes, but even the most trusted friends of Katrina Kaif (even Katrina Kaif will if she's honest) would agree that she doesn't deserve Smita Patil award and like many other baseless awards in Bollywood, this one loses its relevance and credibility.