What happens when two stars from different fields come together? It calls for an epic selfie. When Master Blaster Sachin Tendulkar met King Khan of Bollywood, Shah Rukh Khan, it definitely was a moment to remember. The duo attended the engagement parties of Akash Ambani and Shloka Mehta this past weekend. The event was attended by many Bollywood stars including Priyanka Chopra, Nick Jonas, Anil Kapoor, Ranbir Kapoor, Alia Bhatt, Ayan Mukerji, Karan Johar, Kajol among others. 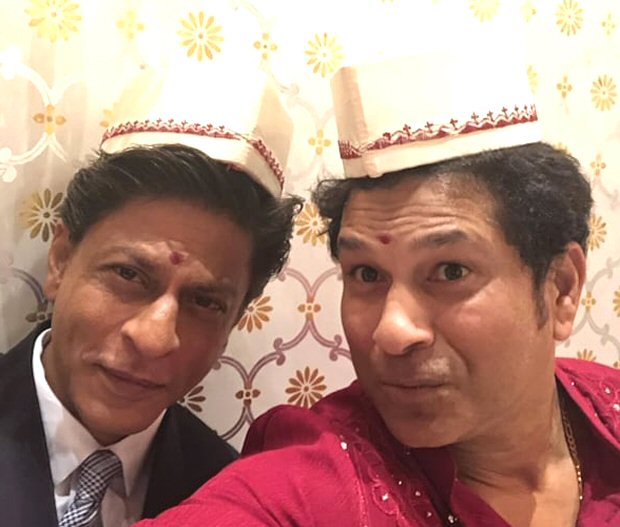 At the pre-engagement bash of Akash Ambani and Shloka Mehta, Shah Rukh Khan met Sachin Tendulkar and both of them were wearing traditional ethnic caps. Sachin shared the selfie of the century with a caption that read, “Jab SRK met SRT.” This selfie is definitely a moment to remember.

On the work front, Shah Rukh Khan will be next seen in Zero which is helmed by Aanand L Rai. He recently wrapped up the film in Orlando. SRK will essay the role of a vertically challenged man. Katrina Kaif and Anushka Sharma star in leading roles. This film will not only show SRK in a different avatar but will have some of the most amazing cameos including Salman Khan, Kajol, Rani Mukerji, Karisma Kapoor, Alia Bhatt and late actress Sridevi. Zero is slated to release on December 21, 2018.