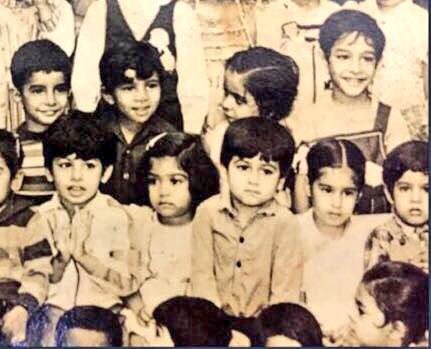 He has been known for his bold content in Bollywood films and was termed as the ‘serial kisser’ for the number of kisses he shared with his female co-stars. Emraan Hashmi tried to break free from the image and soon became a star with some unconventional content to his credit. However, the image related to the risqué content seems to precede him but that doesn’t affect the actor and he is more than happy to accept it.

Well, if his recent social media post is anything to go by, Emraan Hashmi unleashes his witty side as he shares a childhood memory with a caption that will definitely give you a sneak peek into his humour. Emraan posted this picture from his school days where he was seen posing with his batch-mates and he captioned the same saying, “When I was the age of the kids that aren't allowed to see my movies... ??”

Emraan Hashmi is known for his ‘A’ rated films like Murder, Raaz among others and has romanced several actresses on the silver screen. While he is a father of a seven year old boy, the actor had previously stated that he hopes kids don’t watch his films. The actor, while attending an event earlier, was surprised to have a huge fan base among kids. It was then he made the said statement.

On the work front, last seen in Baadshaho, Emraan Hashmi recently forayed into production with his own banner. The actor will also act in his debut production titled Captain Nawab which will have him essaying the role of a spy.