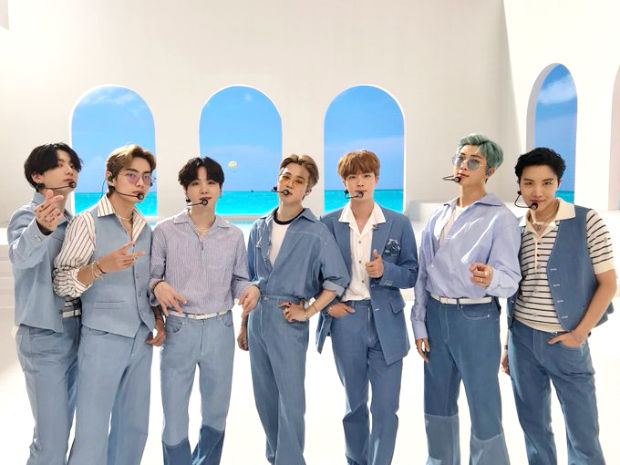 According to Billboard, "It returns to No. 1 from the runner-up spot on the strength of 14 million U.S. streams (up 11%) and 153,000 downloads sold (up 96%) in the week ending September 24, according to Nielsen Music/MRC Data. It also drew 20.8 million radio airplay audience impress."

The report further states, "'Dynamite' spends a fifth total and consecutive week at No. 1 on the Digital Song Sales chart and jumps 17-12 on Streaming Songs, after debuting at its No. 3 high. On Radio Songs, it pushes 47-42."

It's also the first song to rule for at least five weeks in a row since @LilNasX's "Old Town Road," featuring @billyraycyrus, logged its last eight of 16 total weeks on top in July-August 2019.

.@BTS_twt's return to No. 1 is due, in part, to four new remixes released Sept. 18: its "Bedroom," "Midnight," "Retro" and "Slow Jam" mixes accounted for a combined 52% of the song's overall sales in the tracking week.

On August 28, BTS dropped 'Poolside' and 'Tropical' remixes of 'Dynamite' followed by 'Retro', 'Slow Jam', 'Bedroom', and 'Midnight' remixes on September 18. The song already had acoustic, EDM, instrumental versions too.

'Dynamite' music video broke the Youtube record for most views in the first 24 hours, garnering 101.1 million views. The song has topped the iTunes charts in over 100 countries.

A day ago, BTS announced their 'BE (Deluxe Edition)' album will release on November 20, 2020. Taking to their official platform called Weverse, the statement read, "'BE (Deluxe Edition)' contains the most 'BTS-esque' music yet. The latest story from BTS begins by declaring that 'even in the face of this new normality, our life goes on' and imparts a message of healing to fans and to the world."

Speaking about the involvement of the septet (RM, Jin, Suga, J-Hope, Jimin, V, and Jungkook), the announcement said, "This album is made more special by direct involvement from BTS in not only the music but from the concept and composition to design. You will discover throughout the album the thoughts, emotions, and deepest reflections of BTS while experiencing an even richer musical spectrum."