BTS WEEK has begun on. After appearing on The Tonight Show Starring Jimmy Fallon twice already, the septet returned to the US talk show with a brand new performance on their chart-topping single 'Dynamite'. 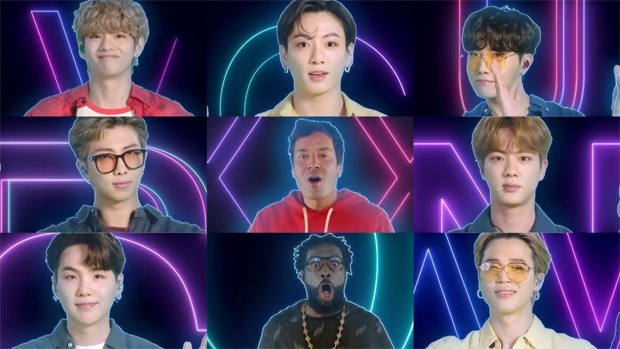 Taking the center stage, BTS took their disco-pop song to another level with A Capella version while performing with Jimmy Fallon and The Roots. BTS brought a lot of fun elements with their swift choreography along with the old-school outfits with vibrant colours, and slick and permed hairdos. It worked as an introduction slide for the seven members - RM, Jin, Suga, J-Hope, Jimin, V, and Jungkook - adding solo shots along with the names both in English and Korean and amped up a lot of vibrance to the performance.

In another surprise, BTS delivered another power-packed performance going back to the 'Idol' era. The performance was pre-recorded by the members from Seoul. Dressed in modern hanboks, this special act was recorded at the Gyeongbokgung Palace or Gyeongbok Palace of the Joseon dynasty. Built-in 1395, it is located in northern Seoul, South Korea. Flaunting their super crisp choreography along with their strong vocals and rap verses, it brought back a lot of memories from 'Idol' era.Previously. BTS delivered a spectacular performance of their title track 'ON' from their album 'Map Of The Soul: 7' at the historic Grand Central Station in New York. They visited the famous Katz’s Delicatessen and did their interview in NYC Subway.

BTS first appeared on The Tonight Show Starring Jimmy Fallon in September 2018 and performed two of their songs - 'Idol' and 'I'm Fine' from 'Love Yourself: Answer' album. Jimmy was seen wearing BT21 merch - Chimmy and had a wonderful interaction with the members. They even did the Fortnite Dance Challenge.

'Dynamite' music video broke the Youtube record for most views in the first 24 hours, garnering 101.1 million views. The song has topped the iTunes charts in over 100 countries.

BTS has already announced their virtual concerts set to take place all the way from Seoul on October 10 and 11. The title “MAP OF THE SOUL ON:E” signifies a ONE and only “ONline Edition” concert. For this event, BTS will go beyond showing just virtual performances and bring massive scale to their stages for about two hours of running time. Technological aspects such as 4K resolution, AR and XR will bring viewers more vivid and enhanced contents. Not only will it be more theatrical, but it will also provide “multi-view live streaming” that displays six multi-view screens from which fans can select their favorite one. This marks the latest collaborative effort between Big Hit and Kiswe since “BANG BANG CON The Live”.

Big Hit Entertainment said, "We have prepared never-before-seen stages and various setlists for fans who must have felt disappointed by the cancellation of offline concerts due to COVID-19. Some songs will also be given variations across the two days. We hope you look forward to “BTS MAP OF THE SOUL ON:E”.”

ALSO READ: 'DYNAMITE' by BTS reclaims No. 1 spot on Billboard Hot 100, remains best-selling song in the US for the fifth week