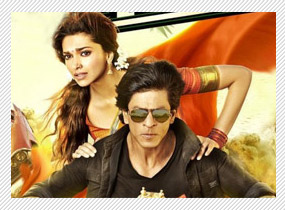 In a career spanning half a decade and 15 odd films, surprisingly Deepika Padukone hasn't really done a full fledged comedy film. Now she is getting much more than what she would have bargained for in Chennai Express where she has experienced the Rohit Shetty brand of comedy that is as relentless as it gets. With Shahrukh Khan anyways managing to keep her in splits with his charm, it has turned out to be a double whammy for her.

Dippy gets her comic act right opposite SRK for Chennai Express

"Deepika has been a part of many urban romcom affairs or some dramatic films but comedy isn't something that she has indulged in. Yes, there was a Housefull but then the multistarrer didn't carry as much scope for her to stretch her comic act to the fullest. No wonder, when she stepped into the mad world of Chennai Express, it was an altogether new challenge awaiting her. She had on to be her toes, literally, for each and every scene since Rohit is a master when it comes to putting together comic scenes while Shahrukh comes with ton loads of experience."

Add to that the fact that she is playing a typical South Indian Tamilian girl and matters became further tough for her as she could neither overdo nor underplay the part. Not just that as delivering a stereotypical performance of a South Indian was out of question too.

Agrees Deepika, "Yes, Chennai Express has been a completely new world for me; not just in terms of the genre but also in terms of the character I am playing. I have come to realize that comedy is a very different and difficult genre to do. Moreover there was no shielding for me either since this is not like another multistarrer by Rohit where you can afford to take your place in a corner. In the film it is just Shahrukh and me which means the responsibility to deliver is all the more."

On a final note she adds, "You have seen the First Look poster and can well realize how mad the set up is. Trust me, you haven't seen anything. Wait for the teaser and you would know how we have gone all out in bringing on the laughter."

We are waiting for sure.