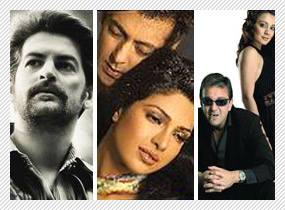 The recent debacle of David has highlighted the fact that films with multiple stories to tell, fail to connect with the audience. Be it Dus Kahaniyaan, or a peppy entertainer like Salaam-E-Ishq with A-listers like Anil Kapoor, Salman Khan, John Abraham etc, or Kunal Kohli's Teri Meri Kahaani, about three love stories set in different time zones played by the same actors, the response of the audience has ranged from being lukewarm to cold. Kohli, whose film failed to do well at the BO with a total collection of only Rs. 28 crore, feels that it's clearly because the writers have not mastered the art of scripting such films.


"Blame it on a weak script and not the format, because eventually I am sure someone will come up with a multiple story film which will be a hit. The main reason for the failure of such films could be that before the audience can connect to a character, the attention shifts to showcase another story. Another reason, which I can tell you from my own experience, is that the audience becomes selective, liking a particular story, while rejecting the other which in turn affects the word-of-mouth publicity of the film. Maybe we should invest in different chapters of the same story with one set of characters, like I had in Hum Tum. Still at the end of the day, I would say it's always nice to experiment," opined Kohli, who confesses that it took him time to recover from the debacle.


Sharing the sentiment as Kohli, Bejoy Nambiar whose David failed to match up to the expectations at the BO said, "I could make out from the feedback that the audience came out liking only one or two of the three stories," said Nambiar whose film opened to a dismal count.


"There is no hard and fast rule that a multiple story film will not work. It all boils down to content; David had style but lacked substance. In todays fast pace, word-of-mouth reviews, if a film is not liked on a Friday morning, by evening the footfalls in the film is out," stated trade analyst Taran Adarsh.


Filmmaker Onir whose I Am, a film which told four short stories received critical acclaim, but a poor response at the BO, says that the success or failure of such films have more to do with the craft. "I don't think it has anything to do with a movie being a multiple cast, because Anurag Basu's Life In Aâ€¦ Metro did work. If one analyses it's not the genre but everything around the film, like the cast, the hype, the marketing which affects the collection. And it's always nice to interweave the stories with each other like I did in I Am to add to the intrigue. I remember this French-English-Spanish film Paris Je T'aime (I love Paris) which had 18 short stories and ensemble cast of actors of various nationalities doing exceedingly well," opined Onir.


But trade analyst Komal Nahta thinks differently, saying that the audience has an aversion to films with multiple stories. "The audience does not like one film with multiple tracks and different characters. The BO performed of such films is also affected by the cast. Big stars in films like Salaam-E-Ishq inflated the budget, making it a losing proposition, while taking small actors does not attract the audience. Taking big stars at discounted price may help these films to work," quipped Nahta.