We are all living through a unique moment in time, 2020 is a year like no other but it definitely didn’t cancel entertainment, not on Twitter. The genre made its presence known on the service more than ever before, fulfilling many essential human needs – from bringing people together and creating online communities to drowning out the monotony of everyday life. Globally, there was the equivalent of more than 7,000 Tweets per minute about TV and movies this year. 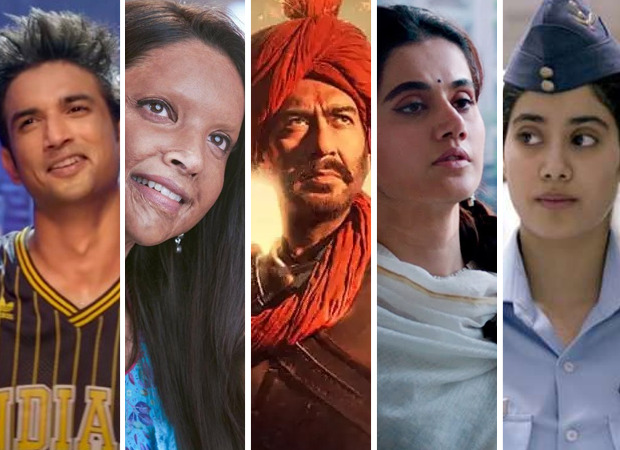 Dil Bechara, Chhapaak, Tanhaji – The Unsung Warrior, Thappad and Gunjan Saxena are the most tweeted about Bollywood films in 2020

With the world being locked down and theatrical releases being on halt for the majority of the year, entertainment enthusiasts embraced the world of digital like never before. Below is the list of most Tweeted about Hashtags of Hindi films as Dil Bechara starring late Sushant Singh Rajput and Sanjana Sanghi was the most talked about Hindi film of the year.

1. Dil Bechara:
This anticipated release went on to become the most Tweeted about Hindi film as people took to the service to express their love and appreciation for the late actor, Sushant Singh Rajput, his last on-screen performance as well as his contribution to the film industry.

2. Chhapaak:
Based on the life of acid attack survivor, Laxmi Agarwal, Deepika Padukone’s Chhapaak received support from people on Twitter for delving into an important storyline.

3. Tanhaji - The Unsung Warrior:
The Ajay Devgn starrer, Tanhaji followed suit as it received country-wide acclaim on Twitter, initiating discussions about the lead actors’ performances in the film.

4. Thappad:
A discussion-worthy storyline came together creating waves among audiences on the service with this Taapsee Pannu film. 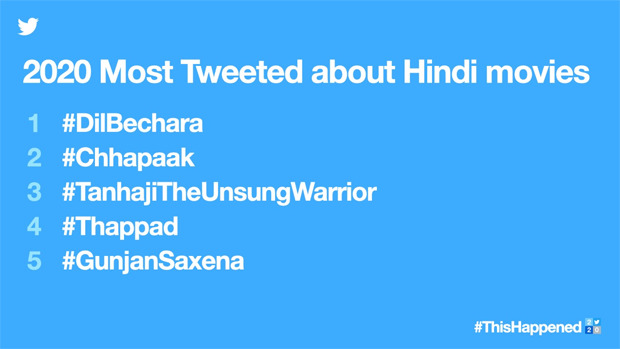 ALSO READ: 2 Years of Kedarnath: When Sara Ali Khan and Sushant Singh Rajput had a meal together on the sets