By now, readers would be aware that Sonakshi Sinha has taken off for the latest leg of the Dabangg Tour Reloaded. The actress, who was recently seen at the teaser launch of Kalank, has taken for the tour along with Dabangg co-star Salman Khan and the director of Dabangg 3, Prabhu Deva and also a few others. Recently what grabbed our attended was this special selfie during the tour. 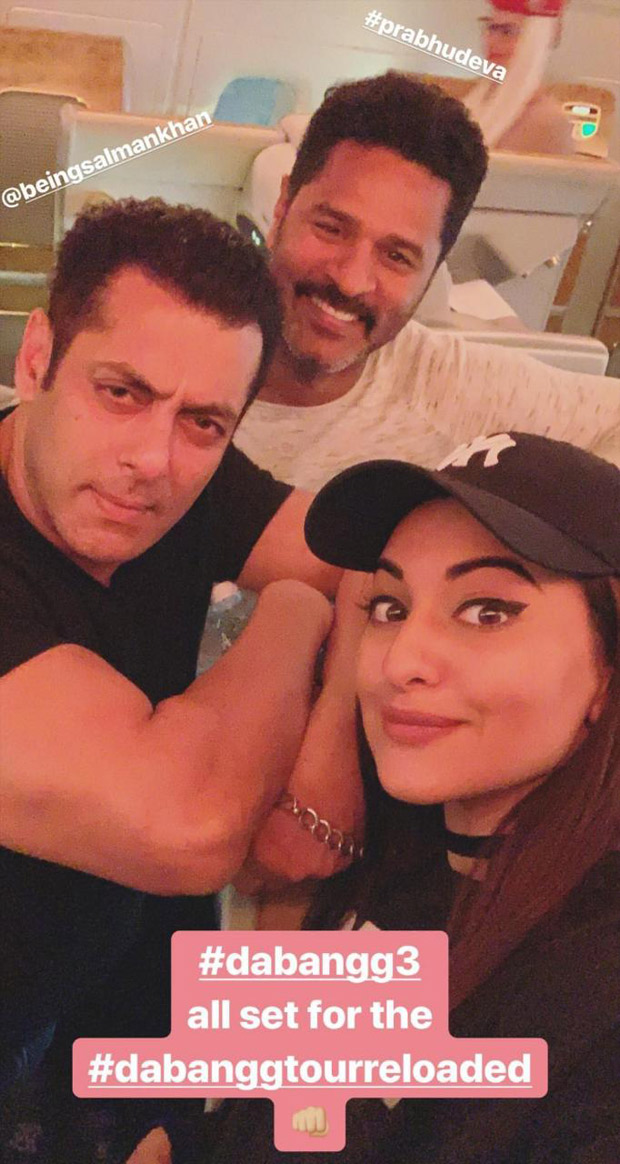 It seems that the team of Dabangg 3 decided to click this special picture before they take the film on floor next month. Recently, we reported that the actors are planning to kick off the shoot of this film in summer itself and it will go on floor on April 1. It is also being said that if all goes well, Dabangg 3 might hit the big screens this year itself, during the occasion of Christmas. But the makers are yet to announce the release date.

On the other hand, the rehearsals of the Dabangg Tour Reloaded have kicked off in full swing as the team is expected to perform in Dubai today. Not just the trio, the tour also includes Manish Paul, Salman’s Jai Ho co-star Daisy Shah, his Race 3 co-actor Jacqueline Fernandez, his Bharat co-star Katrina Kaif, Punjabi music star Guru Randhawa amongst others. The actors have in the past taken to social media platforms to express their excitement to meet the Dubai audience as they took off for the tour.

As for work, Sonakshi Sinha is gearing up for the release of Kalank also starring Alia Bhatt, Varun Dhawan, Sanjay Dutt, Madhuri Dixit and Aditya Roy Kapur. The actress is also expected to feature in an untitled comedy along with Varun Sharma.

On the other hand, Salman Khan will next be seen in Bharat alongside Katrina Kaif which is expected to hit the big screens during Eid.