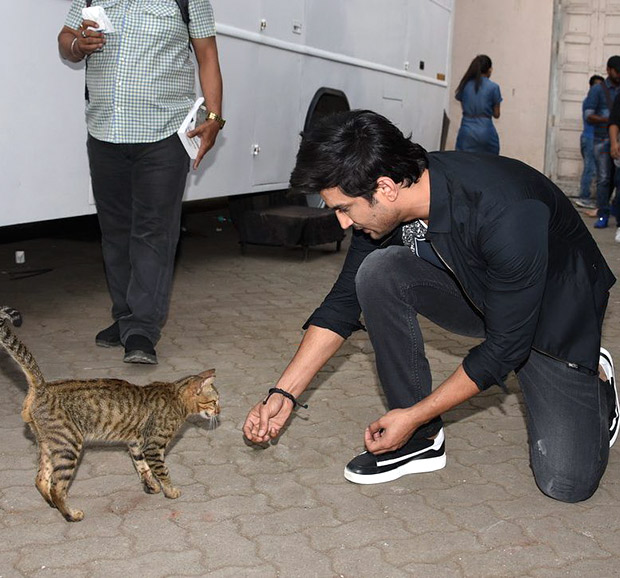 Sushant Singh Rajput’s love for cat came to the fore last year when he landed up for a TV interview wearing a unique T-Shirt. The clothing had the image of a cute feminine figure in an LBD but her head was that of an adorable, furry cat. The actor recently showed his love for cats once again as evident from the picture.

The actor was snapped playing with a cute stray cat when he was shooting at Mumbai’s Mehboob Studio. The actor is dressed completely in black and can be seen bending down to communicate with the little creature. The attempt works as the cat is seen coming towards him and looking curiously at Sushant’s hand.

On the film front, Sushant Singh Rajput recently had a major release, Raabta that sadly failed at the box office. His next release is Drive, which is a remake of the Hollywood film of the same name. It co-stars Jacqueline Fernandez and is set to release on March 2, 2018. He’s about to kick-start Abhishek Kapoor’s Kedarnath and it’s the debut film of Saif Ali Khan’s daughter Sara. He’s also simultaneously working on the space drama Chanda Mama Door Ke, for which he recently trained at the prestigious NASA in USA.