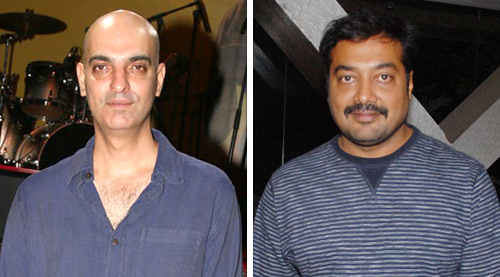 So you saw Bombay Velvet. You didn't like it. Hey, I haven't even seen it here in London, and I don't like it either.


I don't want to like it. I never want to like an Anurag Kashyap film. It's terribly inconvenient. The guy's a fu****g menace. He's a walking Nike commercial. He just does it. He makes 'impossible' seem like a Rugby joke. He makes everything I want to do and achieve in movies seem like a beginning, at best.


But let's come back to Bombay Velvet. A man makes a movie. It's a lavish movie of epic proportions, an epic vision and a hyper-epic effort. It has a big budget. It has a big star. It's meant to take you on the ride of your life, entertain the pants off you, and blow your socks off.


It didn't. Not for most people.


So? You crib. You appreciate some things; hate other bits, maybe tell your friends not to watch it. Fair enough. It's the name of the game. Par for the course. That's how the cookie crumbles. More clichÃ©s along those lines. Hell, you've paid 400 bucks to watch a film, you've bought the right to love it or hate it.


But why do you want know what it cost, how much it made and how much money it lost? Is that why you watch movies? Why you read about movies? Why we make movies?


Simple question. Whom do you want us to make movies for? For your pleasure or for someone's annual report to some nameless shareholders? I would understand if you owned shares of that company. But for us regular Joes, it's about the movie? Right?


Not for you. Not anymore. You actually know the difference between nett and gross. You understand P&A and can do the math on distributer's share. You, who don't know the paid up capital of Reliance or the PE of Infosys. Hell, you don't even know how much money your local MLA has been allotted to cheat you out of. But you know the cost and box office returns of every single movie. Even those you haven't watched!


Hypothetical situation. A filmmaker is making a sprawling Western. There's a huge train robbery sequence. Eleven horses. Suddenly he is thinking, "Hold on. These bloody horses cost ten thousand a day. My audience is judging me on how much money my movie makes. Maybe I can live with one horse less."

Why would you want one less horse in your movie?


To paraphrase Jim Jarmusch, movies don't exist to service business. Business invests in movies because it sees an opportunity. Potentially, a huge opportunity. It's between business and art. Business rolls the dice and takes its chances.


But since when did you become interested in whether a movie made money for someone, above and beyond what it did for you? It's a hit. It's a flop. That's how we've always seen films. But now, we gauge movies based on whether or not it recovered its investment. Who sold you this bullshit? When did you buy it? Why did you buy it?


A movie is a creative decision. No one makes a movie that they don't think people want to watch. It is also a business decision. Made by extremely qualified, experienced and highly paid executives (or rich, brave producers). They decide independent of the filmmaker's evaluation, how many people they think will want to watch, and pay to watch, the film.


Sometimes they are right. Sometimes, they are wrong and the filmmaker is right. Sometimes they are right and the filmmaker is wrong. In the case of Bombay Velvet, as in the case of scores of films every year, they were both wrong. But we keep reading about how much money Bombay Velvet has lost/will lose. Implicitly, lose for the studio.


I simply ask you... so what? Why are we inundated with articles that explain the detailed math of Bombay Velvet's financial implications, almost as if Anurag, personally, is answerable to someone besides his audience? Is he?


Why do none of those articles refer to the people who made the business decision? The people who actually invested the money. Why are we not evaluating *their* choices? Reading their names on Bollywood Hungama's charts? We don't even know their names.

Here's the crux. Does Fox stand by its decision to back the movie? Is anyone asking? Chances are, they do. Chances are they had extremely well-founded reasons to back the movie, and given a similar set of circumstances would do so again. As would a lot of studios.


How can Anurag be responsible for both, the creative and the business performance of his film? Is he making the movie for you or for Fox? As far as you are concerned, Anurag should be answerable for no more than somewhere between two and five hundred rupees. And three hours of your time.


Anurag says he stands by his film. I personally think that's silly. What does it mean? People didn't like his movie. As he himself said, it's done and it's time to move on. What's there to stand by? Emotional bloody sucker. If killing yourself for something over two years doesn't count, how much more can you stand by it?


Dum Laga Ke Haisha is one of the most delightful movies I have seen in recent times. It recovered its investment almost as an afterthought. It did not make a hundred crores for anyone. Not even fifty. Does that make it less special? Is that consequential? In my head, it was a "Hit" the day I watched it.
Amitabh Bachchan. Karan Johar. Ranbir Kapoor. Vikramaditya Motwane. Vikas Behl. Madhu Mantena. Danny Boyle, for f**k's sake. Formidable names; very, very astute people. Do you think they collaborate with Anurag because they think he'll make them a hundred crores? They partner with him because he makes people feel alive. They enjoy what I can only call the Anurag experience. I had that experience once, in the late nineties, and I still suffer from withdrawals. It's also why you, the viewers, watch his films. You want the Anurag experience.


F**k that hundred crores nonsense. We make movies for you. We bend forwards and backwards and at more angles than you believed existed to raise the money and find a way to make them. We would con The Business a million times over just to get that film across to you. We beg, borrow, steal. We sell our asses and lease our souls so that you can hear the tale we have to tell and hopefully enjoy it. Don't pass judgment on what we had to do to make it and how that played out. Let the business protect itself. Because The Business sure as hell isn't protecting you!


I'm not saying Bombay Velvet is a great movie or a future classic. Feel free to not like it. But not because of its business. Talk about its merits and faults, not its numbers.


Hundred crores means nothing to you. You never enjoyed a movie more because it recovered its investment or hated it because the distributer's share was low. At least, I hope you didn't. I hope we still watch movies and apply our own standards. I hope we haven't become a generation of what Ayn Rand calls 'second-handers'.


If you care so much about the money, kiss Lagaan goodbye. Because before that, Ashutosh Gowarikar had made Pehla Nasha and Baazi. Khamoshi didn't make money, so forget Hum Dil De Chuke Sanam. Dhoom and its extraordinarily profitable sequels? Nope. Written off because of Tere Liye (yes it's a bloody movie, the first one I wrote lyrics for). No Ek Tha Tiger; Kabul Express made no money for no one. Crucify Badlapur on a cross called Agent Vinod. And someone please take the microphone away from Dibakar Bannerjee. We'll live without his wonderful films; the guy's never made a hundred crores for anyone.


Like the movie or don't like the movie. Watch it or don't watch it. We're good with that. Heartbroken sometimes, but we get it. And we actually care. Promise. But don't get caught up in the numbers game. Don't force filmmakers to get caught up in it. Let us make movies for you, not for an annual report. Let filmmakers be greedy. Greedy to entertain you, not for a nett box office chart (in Rs cr).


Because ultimately, you will pay the price. You will get one less horse.


And when Anurag comes back and kicks three hundred crore ass, I don't want that wonderful sound to be subtitled.