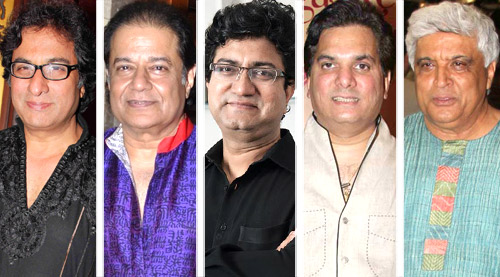 Talat Aziz: "What can I say about Nida Saheb! A poet par excellence, a man with extraordinary knowledge about history, philosophy Sufism, and the works of all the great poets of Urdu. Plus a fantastic sense of humour. I have spent eons with him. And was always left with a sense of fulfilment, yet thirsty for more. He was a fountain of knowledge and we have not lost just a poet extraordinaire but a thinker a philosopher a historian and a man of caliber. This breed doesn't exist anymore and I am proud to have known him and imbibed his company and philosophy. I am sure he is up there smiling and regaling them with his wit charm and knowledge.
Rest in Peace Nida Fazli. We will see you in the yonder."

Lalit Pandit: "It's indeed very sad to know the last great shayar has passed away Nida Fazliji.
He really liked both my brother Jatin and me a lot and when we approached him to work on the ghazal 'Hoshwalon Ko Khabar Kya' in Sarfarosh he was indeed very happy and excited .He was liked by Jagjitji also as they had worked together earlier! Nidaji wanted to work with us again after Sarfarosh and I remember he told us that he would work with us only if we had a good subject to work with him on a film! Unfortunately we could never work again with him and he too never wrote for a film after the Sarfarosh ghazal! With him, ends a long line of learned ghazal senior writers and people of true knowledge of the art of words. He was a great man and he also was a man of self-respect and pride. It's a great lose .I will always remember the moments when he read out the ghazal 'Hosh waalon ko khabar kya' for Sarfarosh. It was destined to be his last work for a film. RIP, Nidasahab. Khuda Hafiz."

Javed Akhtar: "Nida Fazli was a poet with a highly original mind and style, and he practiced a highly unorthodox approach to poetry. His poems express thoughts that have not been expressed before. His language was accessible to both Urdu and Hindi speaking people. Nida Fazli's language was a bridge between Urdu and Hindi. His poems are deeply rooted to the Indian poetic heritage. He could dig deep into the ancestry of poetry. He could make a connection not only with Mir Taqi Mir or Mirza Ghalib, he could find a link with Tulsi, Kabir and Mirabai also. Unhone dohe bahot likhe hain (he wrote a lot of couplets). The language that he used was neither Hindi nor Urdu. It was Hindustani."