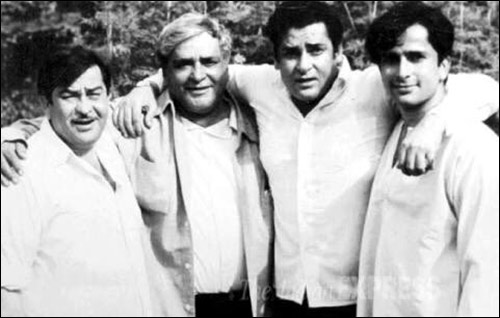 Earlier this month, we gave surfers a look at Rishi Kapoor's look in the upcoming film Kapoor & Sons. Later we showed you what went into developing Rishi's unrecognizable look in the film. Well the actor, who is pretty active on the social networking platform twitter, posted an old image that portrays the legendary actors Raj Kapoor, Prithvi Raj Kapoor, Shammi Kapoor and Shashi Kapoor, with a simple line saying, "Original Kapoor & Sons".

Back to the film, Kapoor & Sons which features Alia Bhatt, Sidharth Malhotra and Fawad Khan apart from Rishi, who plays Alia Bhatt's grandfather, is said to be a romantic and comedy directed by Shakun Batra and produced by Karan Johar under the banner Dharma Productions.