Following the release of the lyric video, British-rock band Coldplay and 21st-century pop icons BTS have released their much-anticipated music video for their first collaboration, ‘My Universe’. After their recent meet-up in New York followed by Coldplay's performing the song at several gigs, the video dropped on Thursday morning, September 30 (9:30 am IST) performed in both English and Korean. 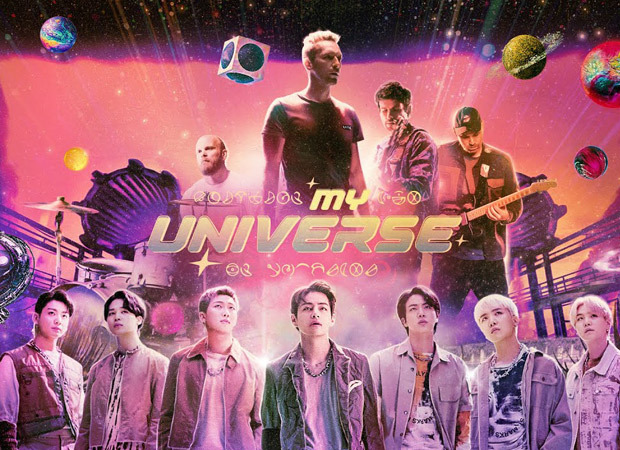 The Dave Meyers-directed video is set in the distant galaxy where three bands BTS, Coldplay, and an alien supergroup called Supernova 7 come together to perform music after the music is forbidden. In an attempt to defy the ban, three bands from different planets connected via holograms come together in this space-themed video. Sung in both English and Korean, the overall song envisions "love" as a meaningful and purposeful thing in life in all forms. The hook works like an earworm, "You, you are / My universe / And I just want to put you first / You, you are / My universe / And I."

Another impressive Korean lyric mentions the word 'for a moment' which seems like a subtle nod to their BTS' song 'Telepathy' whose Korean title is “잠시” which means “for a moment” from their chart-topping album BE, released in November last year. "Cause you're my star and my universe / Cause at the end, these trials will be only for a moment / Please just shine brightly forever like you are now / We'll follow you and embroider this long night (with stars)."

In a recently released documentary, Chris talked about collaborating with BTS and said, “It’s very special to me that the most popular artists in the world speak Korean and are like a group of brothers, not from the West. It feels very hopeful to me, in terms of thinking of the world as one family. Then of course, when you see who they are and their songs, it’s really a message of togetherness and being yourself.”

This Coldplay and BTS collaboration is 18-months in the making. In the documentary, how both the groups emphasize creating a song to give comfort to the people around the world. In the music video, the space-themed scenes have intricacies like the villain is made keeping coronavirus in mind that's been keeping the bands apart from their fans. The dance break gives the opportunity to BTS to showcase their power on stage. These are such minute details but showcase how much effort went into the making of the song. Shot in The Pools of Castellnou in Rubi, City of Barcelona, Spain, BTS filmed their parts in Seoul and the detailing of the sets is immaculate. The group even flew to Korea to record the track.

Coldplay and BTS are legendary artists in their spheres and no one could have ever thought that two groups from different schools of music would ever make music together; though there was always hope they work together someday. But, times have changed, lines are blurring and music is what's been the biggest source of healing. Coldplay gave that respect to the South Korean group without holding any prejudices whereas the latter ensured that they bring in their own flavour to the song while working with the artists who they grew up listening to and admire.  This collaboration has turned out to be such a magical moment. It once again proved that music transcends barriers and artists who have same vision can come together to create something so beautiful.

Recently, BTS appeared on the special episode of YouTube Originals’ weekly music series “RELEASED” on September 9 leading directly into the premiere of BTS ‘Permission to Dance’ MV (Shorts Challenge ver.) on September 10 at Midnight ET. The band was joined by Coldplay frontman, Chris Martin, for an intimate conversation on what inspired the #PermissiontoDance Challenge on YouTube Shorts and to discuss their shared experience as global musicians.

Back in February 2021, BTS performed Coldplay's 'Fix You' during the MTV Unplugged episode. Over the years, the song has been a part of the group in several ways - one might have heard it in one of their videos, in Jimin and Jin's Spotify playlist, Coldplay being on the collaboration bucket list for V and RM.

Coldplay has also teased the song’s Dave Meyers-directed official music video, as “coming very soon”. 'My Universe' follows Coldplay’s worldwide hit 'Higher Power' as the second single to be taken from the band’s forthcoming album ninth studio album Music Of The Spheres, which will be out October 15th, 2021.