"In the days that feel the same / I’m the happiest when I meet you / In my everyday life that is different every day / the person that is you is the most special to me," Jungkook and Jimin croon 'Telepathy' lyrics from the chart-topping album 'BE'. The highly anticipated MTV Unplugged with global popstars and Grammy-nominated BTS aired on February 24 on VH1 India and Voot Select. 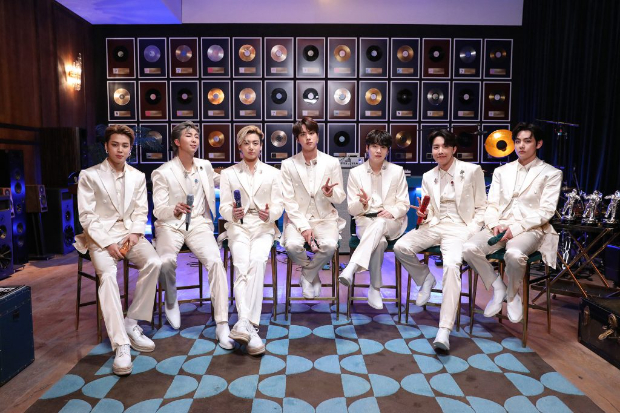 On February 9, MTV announced BTS will bring its own iteration of the iconic Unplugged format to life straight from Seoul, South Korea - offering their fans a front-row seat to never-before-seen versions of the group’s most career-defining hits and songs from their latest album 'BE', in intimate settings. As always, BTS did not disappoint. It was already teased earlier that BTS will croon the latest tracks from their album along with a special cover.

Those who grew up watching MTV or were impacted in their growing years through the MTV Unplugged performances of Paul McCartney, Mariah Carey, Eric Clapton, Bruce Springsteen, Shakira, Alannis Morissette, Pearl Jam, and Nirvana to name a few, would remember how iconic these specials were. In 2021,  BTS' performance was a breath of fresh air in times when you are in need to find solace and comfort.

Kicking off the awaited episode with their funky rhythm track 'Telepathy', Korean title '잠시' meaning 'for a moment', the septet croons in the most relaxed environment - a basement-style room filled with arcade games, couch, and more giving the old-school retro vibes. It is to be noted this was first performance of the B-side track, so the excitement is unreal. As the members finished off the performance in the most fun way, Jimin reminded everyone that member Suga had returned to the stage after recovering from his recent shoulder surgery. Explaining the song, the rapper said, "We are in a situation where we can't meet the fans around the world in person due to COVID-19. So the song's lyrics describe the current situation of temporarily being apart from each other"  - further adding that ARMY was the inspiration behind the song. So, it made perfect sense to start with a track that is about their massive fandom as they couldn't meet them in person amid the COVID-19. Giving a hopeful assurance to them through this comfort track that they are at their happiest best whenever they meet the fans.

Soon, BTS ventured into more emotional acoustic pop ballad 'Blue & Grey' which was earlier meant for V's solo mixtape. After hearing the track and being loved by the members, the song was put in this special album that was curated by the septet from the scratch. One just knows it's going to be a rollercoaster ride when the vocals are pitch-perfect. Performing the song for the very first time, the set had music video feels! Back in November during the first listen, it was gut-wrenching to feel heavy emotions. Months later, today, the feeling is the same. "Where is my angel / At the end of the day, casting its shadow / Someone come and save me, please / is only the sigh of the exhausting day / It seems like people are all happy / Can you look at me& / Cuz I am blue & grey / The meaning of my tears that are reflected on the mirror / is the color that is hidden under my smile, blue & grey," - reflects on the gloominess and burnout one feels during the lowest point in their lives.  There comes a part where V's adlibs to 'Oh this ground feels so heavier' truly strikes a chord with you and relays the vulnerability in the most poetic way! "'Blue & Grey' is a pop ballad track with charming acoustic guitar sounds,," said V after the performance. "I tried to express my inner sadness and uncertainty, so I translated the feeling of burning out as 'blue' and the sadness of not being able to see ARMY as 'grey'. The melody of the song is simple, so I paid closer attention to delivering the emotions through lyrics."If's there's anything that BTS does is elevate a song - if given an opportunity to perform a cover, it's filled with glorious vocals. A few hours before the episode aired, it was teased that BTS will perform 'Fix You', originally by the popular band Coldplay. Over the years, the song has been a part of the group in several ways - one might have heard it in one of their videos, in Jimin and Jin's Spotify playlist, Coldplay being on the collaboration bucket list for V and RM. Ofcourse, BTS chose a song that resonated with millions when it first released and in 2021 during COVID-19 times, as the song is about understanding grief, vulnerability, and pain and providing comfort to someone. It is exactly what BTS stands for and completely imbibes it in their music. Adding their own personality to the rendition, the cover actually gave goosebumps especially during the harmonisation parts of Jimin-RM, Jin-Suga, V-J-Hope, Jimin-RM as it looked like they are interconnected during the instrumental bridge. V closed the performance with the most chilling lyrics "Lights will guide you home / And ignite your bones / And I will try to fix you." At a time when you need reassurance, this was a song that is in perfect sync with current times and has similar emotions like in some of the BTS songs including 'Spring Day', 'We Are Bulletproof - Eternal', 'Mikrokosmos' and more!Wrapping up with their Billboard Hot 100 No. 1 tracks 'Life Goes On' - a song about moving ahead in life even in the darkest of days and anthem of the year 'Dynamite' - an explosive retro disco track all about treasuring little things in life, BTS gave a performance to remember with their live band - The Ghost Band. Dressed in monochrome suits and showing off their power vocals, it was a moment to remember!There's no doubt about BTS always delivers a grand and great performance! Known to embark on grand stages, the year 2020 was a humbling experience to many including BTS who not only had to cancel their world tour but also were recording performances without live audiences. In these vulnerable times, BTS found solace in making music, getting creative with sets with their teams working to outdo themselves with each performance. It was all about creating an album in the pandemic for fans around the world to provide comfort, joy and love.What made MTV Unplugged special was their unwavering connection with each other throughout the episode, showcasing their raw and personal emotions during the ballads, and leaving an impact with each song. Starting with a banger, taking on an emotional ride, and ending on an anthem - it sounds like something BTS would do on and off stage. BTS delivered a performance that is an ode to their craft and a love letter to their fans!