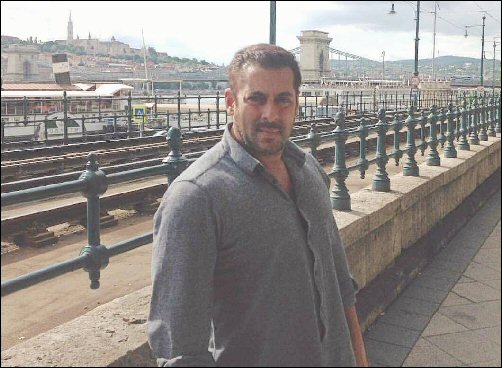 Earlier we had reported that the leading actors of Sultan namely Salman Khan and Anushka Sharma will be flying to Budapest to wrap up the remaining portions of the film. And now that the two are already in the Hungarian capital, they have decided to directly dive into work.

It's not even been couple of days since the actors have landed and pictures from the sets of the film have already been doing the rounds on social media. Here's a glimpse of Salman Khan in his Sultan avatar that has gone viral on Instagram. The importance of this picture is that this place remains to be nostalgic for Salman Khan since this was where one of his biggest blockbusters Hum Dil De Chuke Sanam directed by Sanjay Leela Bhansali was shot. A major portion of the Aishwarya Rai Bachchan, Ajay Devgn starrer was shot overseas, considering that Ajay helps Ash's character to trace the location of her lost love, that is, Salman Khan.

On the other hand, Sultan belongs to a completely different genre. The film traces the journey of a wrestler named Sultan, who is all set to rise again after a series of incidents lead to his downfall. Also starring Randeep Hooda and Amit Sadh, Sultan, directed by Ali Abbas Zafar is slated to release on July 6.