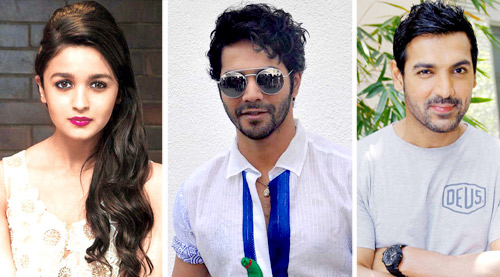 The news of the demise of the 74 year old legendary American boxer Muhammad Ali has taken the world by a storm. Amidst several fans who are expressing their grief on social media, Bollywood celebrities too took to Twitter to share their condolence messages. Here are a few tweets:

Varun Dhawan: Rip #MuhammadAli. The real champ. His story and struggles have motivates us all and will continue to do so.

Abhishek Bachchan: Rest in peace legend @MuhammadAli #FloatLikeAButterfly #StingLikeABee #GOAT. Crushed! @MuhammadAli was the 1st sportsman I was told about by @SrBachchan. He was inspirational and an idol.

Arjun Rampal: The greatest, the fearless poet .He floats like a butterfly, stings like a bee. Muhammad Ali. U shook up the world. RIP #thegreatest

Arshad Warsi: He said it and he did it... RIP Muhammad Ali, the Greatest fighter on and off the boxing ring...

Rishi Kapoor: RIP. Muhammad Ali. Was at a function with him in Bahrain think early 80's. He was unwell and he called me "pretty boy"

Randeep Hooda: "Float like a butterfly, sting like a bee." #RIPMuhammadAli #TheGreatest doesn't pass on, he lives on

Ayushmann Khurrana: "I'm so fast that last night I turned off the light switch in my hotel room and was in bed before the room was dark." - #RIPMuhammadAli

Anil Kapoor: His personality was as exemplary as his sportsmanship... his spirit will always dare us to dream bigger & soar higher! #RIP #MuhammadAli

Dia Mirza: Thank you for the strength. My childhood would have been incomplete without your inspiration. #RIPMuhammadAli

Sophie Choudry: RIP #MuhammadAli ..True inspiration & champion for billions around the world! What a life, What a legend #respect

Mallika Sherawat: He who is not courageous enough to take risks will accomplish nothing in life- Muhammad Ali

Elli Avram: 'I am the Greatest, I said that even before I knew I was' #MuhammadAli rip. What a legend

Sooraj Pancholi: "I am the greatest, I said that even before I knew I was" RIP #MohammedAli

Saiyami Kher: "I am going to show you how great I am." And he sure did! Really sad when true greats are no more. #RIP #MuhammedAli

Neha Dhupia: RIP #muhammadali the world jus lost one of its greatest ... #cassiusmarcellusclay

Diana Penty: "To be a great champion you must believe you are the best. If you're not, pretend you are." #Muhammad Ali

Lisa Ray: Cassius Clay. You taught that the greatest fight is simply to be yourself. #RIPMuhammadAli

Kunal Kapoor: The greatest - inside and outside the ring. Rest In Power champ #heartbroken #MuhammadAli

Aanand L Rai: "It isn't the mountains ahead that wear you down. It's the pebble in your shoe."-muhammad ali RIP CHAMP

Vivek Agnihotri: "Catch me if you can... I am Muhammad Ali' RIP

Maheck Chahal: Float like a butterfly, sting like a bee. He who is not courageous enough to take risks will accomplish nothing in life. RIP MUHAMMAD ALI

Javed Jaafri: "Mohammed, Mohammed Ali He floats like a butterfly and stings like a bee" RIP to my greatest sports hero (and continued to post photographs of the legendary boxer)

Anubhav Sinha: Life is so temporary that even Mohammed Ali dies. RIP King.....

Ali Abbas Zafar: One of the most inspiring man with most inspiring life Muhammad ali passes away May Allah rest his soul in peace. You'll be greatest forever

Arjun Kapoor: He did float like a butterfly and stung like a bee Mohammad Ali was an inspiration to all of us RIP