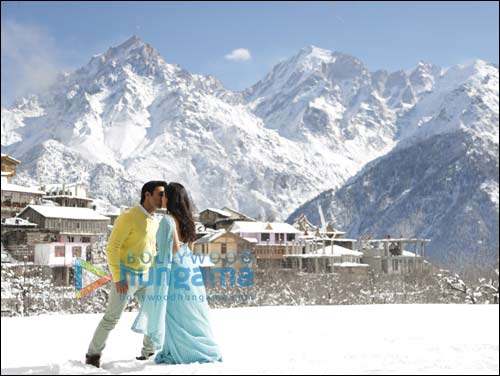 Yami Gautam and Pulkit Samrat set the temperature soaring while shooting for Bhushan Kumar's musical romantic Sanam Re. In fact the villagers in Kalpa, near Shimla, got to see some live action when they witnessed the lead actors shooting a kissing scene.

Divya Khosla Kumar, who dons director's hat once again after delivering her debut hit Yaariyan says, "The place where we were shooting Kalpa, is eight hours away from Shimla and there are no theatres in that area. The climate was minus 10 degrees Celsius and it was extremely cold. My crew, who all are from Mumbai, had a tough time shooting there for a few days as we are not habitual to such cold climate. The place was covered with snow and was looking beautiful, an ideal location to shoot such a scene. The curious people from the frozen village gathered around our shooting location and started to watch us shoot the lip-lock scene between Pulkit and Yami. They were quietly looking with curious expressions on their face while some women were smirking with amazement."

It was freezing and was next to impossible to shoot in the cold. Divya says, "Pulkit and Yami were shivering while shooting and were constantly given hot drinks and warm shelters at regular intervals. I am glad that we managed to shoot the scene without any disturbance and hurdles. It has been shot aesthetically with a beautiful background."

Sanam Re that is produced by T-Series and is directed by Divya Khosla Kumar is slated for release later this year.