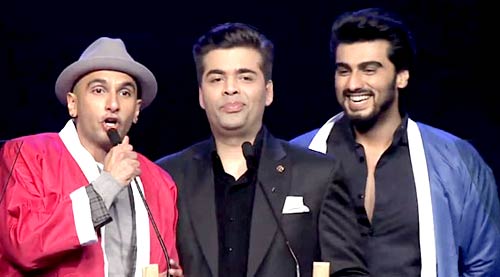 In my salad days as a film reporter, a veteran distributor of Hindi films once told me, "Yeh dhanda andhere ka dhanda haiâ€¦ yahan sab kuch andhere mein hota hai. (This is a business of darkness. Here, everything happens in the dark.)" Early this week when I saw the AIB (All India Bakchod) Knockout video, I felt maybe it's time to unlearn the lesson taught by my old friend and get up to speed with what the Youngistan is saying. The defining line in the AIB video was when Rohan Joshi said, "Why are they saying in public what we say in parties?" I clapped when I heard this line. I thought to myself, 'This was it! We are having A MOMENT as an industry and as a country. Finally Bollywood is coming out of the business of darkness and taking it lightly. Wow. We have grown up. Haven't we?'

Of course this was an anticlimax. I just got happy for nothing. We all know the script. The video has been taken off from YouTube after a member of the Central Board of Film Certification, Ashoke Pandit, objected to its content in explicit language. Clearly, as a culture we are still babies and we need child locks even on the internet and we need to be told what to laugh at, and how much to laugh at. Because you see, we are The Republic of the Offended.
While there are no easy answers - as the AIB said in an open letter responding to the backlash, "There is a larger cultural conversation going on here,"- what is heartening in this entire free-for-all is that Bollywood has shown that it's game to have fun. Bollywood stars have always lacked a sense of humour. In a movie-obsessed country like ours where they make temples for film stars, it's not shocking when some of them start believing that they are demi-gods. But since the past few years, flutters of change could be felt. As India got younger and embraced social media, Indians (suddenly) discovered their funny bone. It's not that we didn't crack jokes earlier or ranted and raved about things that bothered us but now thanks to Twitter and Facebook we feel we are all feelin' the same and we really are like this only. Hurrah for Group Catharsis.

The change is all-enveloping. In today's celeb-obsessed world where the "Selfie" has killed the "Autograph" and where medium is the message as well as the medium, Young Bollywood has shown that they are also like us only. That they too can laugh at themselves. Today's stars want to be seen as the vanguards of 'Indie Cool' which is why full props to Ranveer Singh and Arjun Kapoor and all the stars in the Front Row at the AIB Knockout event for taking the jibes on the chin. And then there was Karan Johar, a leading filmmaker and an important thought leader in the industry. With him as the Roastmaster, a strong message went out that young Bollywood is growing up. Yes, the same Bollywood that was strategically included in President Obama's speech. Bollywood, India's biggest soft power currency which is always derided and ridiculed. That's also our national character by the way. To abuse what is ours. To abuse what is popular. To abuse what scares us. To abuse what is funny. We are (also) cool like that.