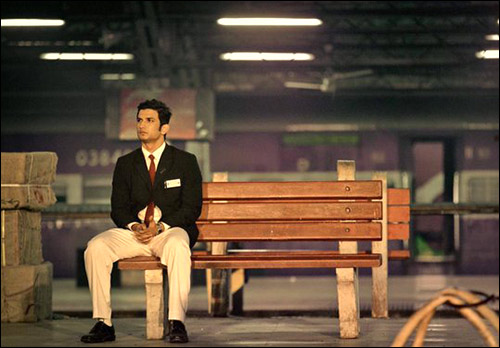 Sushant Singh Rajput who is busy with the biopic on the renowned captain of the Indian cricket team Mahendra Singh Dhoni recently was seen in a new look he has donned for the film. Though we have often spotted glimpses of the actor in his looks as Dhoni, Sushant released this picture on his official Twitter handle.


Sporting the uniform of a ticket collector and a clean shaven look, the image has Sushant sitting on a bench at Kharagpur railway station. Sharing it on the micro-blogging site, the actor also made an announcement about the teaser release of the film saying, "All you guys know who MS Dhoni is. Now let us tell you his untold story! #MSDhoniTheUntoldStory teaser out on March15."


Tracing the life of Dhoni as a cricketer and promising to reveal several aspects of this Indian captain's life, MS Dhoni-The Untold Story is said to encompass his professional as well as personal struggles. Very few may be aware that Mahendra Singh Dhoni was a ticket examiner in Kharagpur railway station for a couple of years in the early 2000s. The recently released picture is depicting the said phase of the cricketer.


Directed by Neeraj Pandey, MS Dhoni -The Untold Story has Kiara Advani playing the role of Dhoni's wife Sakshi and it is slated to release on September 2.