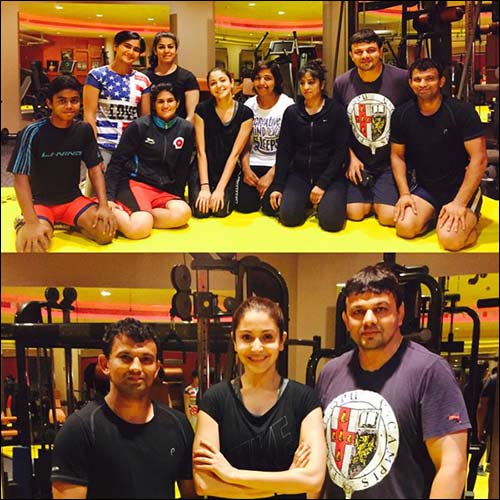 Though all eyes are set to watch Salman Khan as a wrestler, adding to the film's curiousity, was the announcement about Anushka playing a similar character. For the first time, we will see this Bollywood actress doing such a full-fledged action packed role of a wrestler.


Gearing up to play the role with conviction, Anushka Sharma has been practicing wrestling with a handful of professionals to get the nuances right. Sweating it out constantly, the actress has been prepping for the same for the past few weeks and now, she recently took to twitter to thank her teachers for their efforts. Posting an image with the ones who have taught her wrestling, the actress further added, "On my way to the shoot, Thank you to these amazing teachers/ pro wrestlers. From whom I have learnt the sport (wrestling) over the last 6 weeks ???????? grateful for having teachers like you'll."


In fact, the film's director Ali Abbas Zafar complimented Anushka's efforts saying, "Anushka has dedicated six weeks to the wrestling program that has drastically changed her body language and has also transformed her body into a very authentic looking wrestler."

Anushka's wrestling trainer Jagdish Kaliraman couldn't stop praising about her and said, "Anushka ma'am is very hardworking and she has a lot of will power. Wrestling is a very tough game but inspite of it being so tough she is very confident and always wants to be the best at it. She observes every move that we show her very carefully and after showing her maximum two times she exactly knows what to do. She is such a big superstar but she is so humble, down to earth and extremely sincere towards learning the art form of wrestling. She gave her 100% for the training and always up for learning more and more and to be the best at it. Wrestling is a very rough and tough game which needs a lot of stamina for which she has worked a lot in the gym to be best at it. When people watch the film they will know that Anushka ma'am has put in so much hard work and has moulded into the character so well."

Directed by Ali Abbas Zafar and produced by Yash Raj Films, Sultan will be extensively shot in Haryana and it is slated to release during Eid 2016.