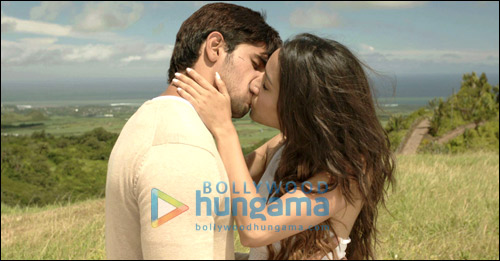 Kissing seems to be one of the most prominent aspects of contemporary love stories and it surely adds on to the sizzling chemistry of the on screen couple. To add on to the romance, Sidharth and Shraddha heat up the screen with their intimate kissing scene in their upcoming thriller Ek Villain.

Playing the role of a gangster Sidharth falls in love with the free spirited Shraddha in the film and the two are seen enjoying some rather romantic moments together. This is not the first time that the two film old Sidharth is seen kissing his co-stars. The actor was seen kissing Alia Bhatt in his debut film Student Of The Year while he was seen doing the same with Parineeti Chopra in his next venture Hasee Toh Phasee.