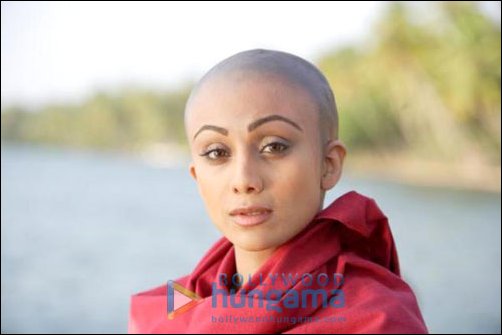 Shilpa Shetty, who has been MIA (Missing in Action) from the Bollywood scene for a while now, is all set to shock her fans in her forthcoming film The Desire. The actress will be seen in a bald look in the film. However what is interesting to note is the fact that Shilpa didn't actually shave her head but used make-up to get the desired bald look.

The Desire, scripted and directed by R. Sarath, stars Chinese actor Xia Yu and Shilpa Shetty in lead roles while Anupam Kher, Jaya Prada, Vikram Gokhale, and Asif form the supporting cast. The film is perhaps the first Indo-Chinese collaborative production and is produced by Sunanda Shetty under the banner of Ten Golden Star, and co-produced by Shi Yun. The film has been selected to the New York City International Film Festival 2011, where it will be screened on August 24.

Shankar Ehsaan Loy and Vishwamohan Bhat have composed the music of The Desire. The film has been shot in Kerala, Gujarat, Maharashtra, and Andhra Pradesh in India and also at various locales in Malaysia.