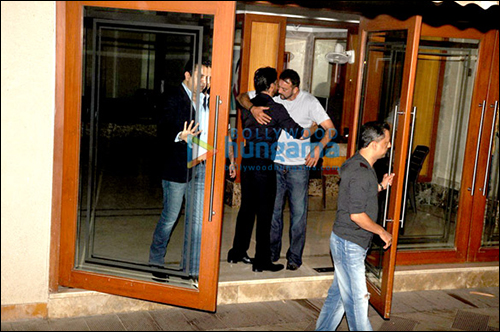 Amidst several well-wishers who visited actor Sanjay Dutt after his release from jail, there is yet another superstar who after a hectic schedule came to meet the actor. It was none other than Shah Rukh Khan who met Sanjay Dutt at his residence.

Shah Rukh Khan and Sanjay Dutt were seen sharing a warm hug when the former came to visit Sanjay after he returned from Yerawada jail. It is a renowned fact that the entire Bollywood clan came together in support of Sanjay Dutt when he was sentenced to five year imprisonment after being accused of owning illegal arms and ammunitions during 1993 riots. From what we hear, the actor will also resume work soon but as of now, he is focusing on spending quality time with his wife Manyata and his kids. On the other hand, the actor spent his weekends meeting up with his colleagues and friends from the fraternity which included his best friend Salman Khan, Ameesha Patel, Sanjay Gupta, David Dhawan, Shilpa Shetty among others. During Shah Rukh's recent visit, he too was accompanied by Suniel Shetty and Jackie Shroff who decided to catch up with their old buddy Sanjay Dutt. Shah Rukh Khan is said to have dropped by at Sanjay's place after he wrapped up the shoot of Raees in the city.

On the Bollywood front, we hear that Sanjay Dutt will initially be wrapping up ventures he was previously committed to before signing any new films.