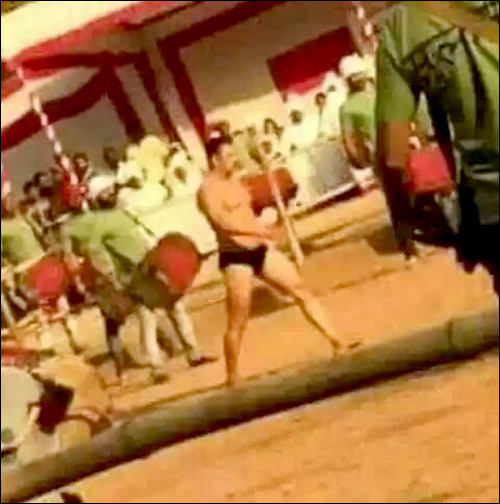 A lot has been talked about the currently underproduction Yash Raj Films' Sultan that features Salman Khan and Anushka Sharma. In fact several images of the actor shooting or training for the film have found their way to social media sites. Well, we came across yet another image of the actor shooting the film, this time in just his briefs. While the image is a bit grainy, we guess the actor sequence involves one where Salman is seen wrestling thanks to the background of an akhada.

Apart from this, we also hear that though in Sultan, Salman plays the role of a wrestler; he will also be seen doing some high octane action sequences that will feature a kite running sequence that will involve the actor indulging in parkour with him see him running, jumping, vaulting obstacles in the stress and on terraces. Interestingly Salman has apparently shed 12 kgs for the said stylized parkour sequence in the film which is being developed by stunt choreographers Larnell Stovall and Parvez Sheikh.

As for the film, Sultan that is directed by Ali Abbas Zafar and produced by Yash Raj Films, Sultan is slated to release during Eid.