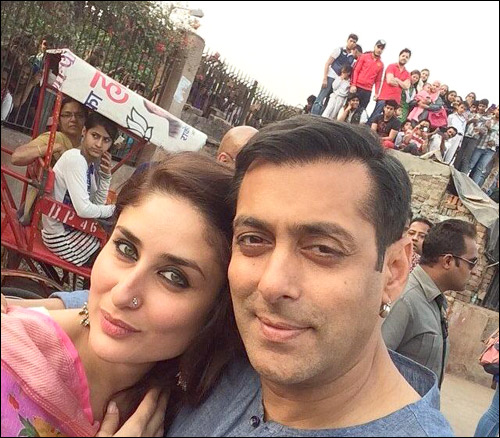 A couple of days back, Kabir Khan tweeted that he had finally commenced working on his next project Bajrangi Bhaijaan. While the film that features Salman Khan and Kareena Kapoor had been announced a while back, Bollywood Hungama recently came across this image of the two actors on sets of the film.

The on location image is basically a selfie taken by Salman Khan that features him along with Kareena Kapoor. In fact Kabir Khan had earlier tweeted saying that the shooting for the film had commenced in Delhi on the banks of the Yamuna river.

Bajrangi Bhaijaan is said to be a love-story of Muslim guy and a Hindu girl, played by Salman and Kareena and will also feature Nawazuddin Siddiqui playing a pivotal role. Produced by Kabir Khan himself, the film is scheduled to release on Eid next year.