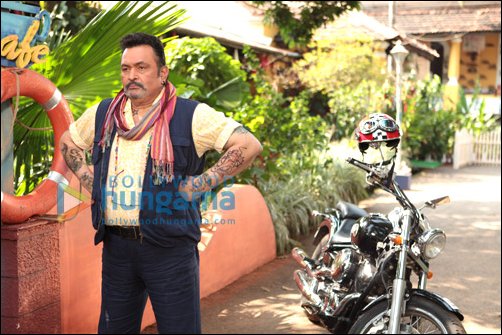 On one hand, Rishi Kapoor will be seen playing the role of the underworld don Dawood in Nikhil Advani's film D-Day, while on the other, we hear that the prolific actor will be donning a completely new avatar in director David Dhawan's Chashme Buddoor. In fact Rishi will be seen as a biker dude complete with tattoos of bikini-clad girls, riding a Harley Davidson.

In the film, Rishi essays the character of a bachelor Goan ex-sailor running a restaurant who has crossed the age of marriage but still gets excited at the prospect of meeting a girl. Apparently, it was Rishi's idea to include the Harley and tattoos to help add to his overall look.

Chashme Buddoor which is the remake of 1981 hit romantic comedy by the same name is directed by David Dhawan and stars Ali Zafar, Siddharth, Divyendu Sharma, Tapsee Pannu, Rishi Kapoor, Juhi Chawla and Anupam Kher. Produced by Viacom 18 Motion Pictures the film is slated for release this April.