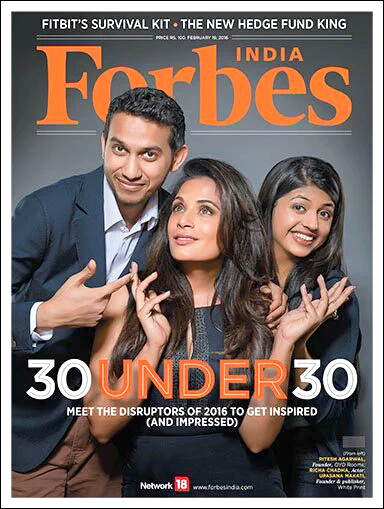 The versatile actress Richa Chadda who has wowed the audience with her stellar performance on all of her film has made it to the Cover of Forbes India for the month of February. Featuring in Forbes India's 30 Under 30 project, Richa who has risen up out of the offbeat film to mainstream Hindi movies has made a niche for herself in the industry by consistently delivering epic performances by portraying some of the most difficult roles.


Richa who marked a new turning point of her profession in 2015 with her widely praised film Masaan and her distinctive part in Main Aur Charles went ahead to represent India internationally when she was on the jury at the Marrakech Film Festival, which was presided by Mr. Francais Coppola, director of Godfather.


Along with Richa on the cover are Ritesh Agarwal- founder and CEO of OYO Rooms and Upasana Makati, Founder and Publisher- White Print. Back on the film front Richa has her hands full with three projects viz. the Sarabjit biopic, Sudhir Mishra's Aur Devdas and Pooja Bhatt's Cabaret.